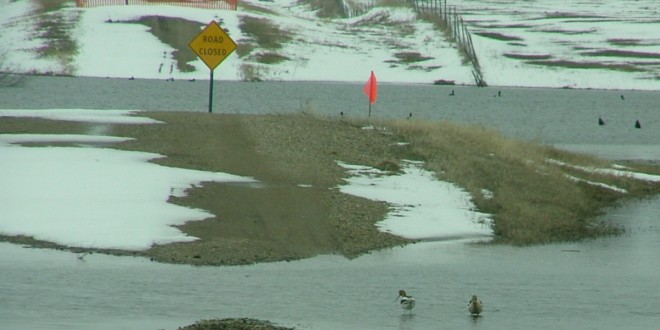 As the climate changes, agriculture changes as well

Damaging flooding, like this scene near Frederick, S.D., in 2011, is likely to happen more often with increasing climate change, according to some estimates.

The reports on weather trends are using a lot of superlatives lately.

Each month last summer brought a new report that that month was the adding to the chain of months of above-average temperatures. (The Earth last had a below-average month in 1985.)

Then, in January, we heard that 2012 was the hottest year ever in the United States, since the National Climactic Data Center’s records started in 1895. Differences in temperature between years are normally fractions of a degree, but 2012 beat the previous record year, 1998, by a full degree Fahrenheit.

These statistics are but the latest data points in a long chain of evidence that suggests climate change is happening. And, as the Intergovernmental Panel on Climate Change reported in 2011, it will likely get worse: Dangerous “unprecedented extreme weather” is likely to happen in the future. The Dakotas are not exempt from these trends, even as places where extreme weather is commonplace.

The question, then, is not whether climate change is happening, but what can we do in the face of it.

Farmer David Podoll of Fullerton, N.D., says he remembers when corn and soybeans were an anomaly in North Dakota.

“Corn and soybeans were just experimental crops until the late 1980s,” Podoll says.

Now the state looks much more like Iowa than the Dakotas of Podoll’s childhood. That is in part due to longer growing seasons that allow farmers to take advantage of late-maturing crops, notably corn, which yield more than their short-season counterparts.

Laura Edwards, South Dakota State University climatologist, says the same changes of warmer, wetter weather and a longer growing season have happened in South Dakota as well, which has helped corn and soybeans dominate the landscape.

While some might view a longer growing season as a positive change, other climate changes have been clearly negative.

Weeds and pests also thrive in warmer, wetter weather, forcing farmers to be diligent about tillage and the use of pesticides. Podoll, who farms organically, has been stymied in his efforts to grow wheat, oats, barley and rye because climate change has made North Dakota more hospitable to plant diseases. Because of this, he grows a smaller suite of crops than he once did.

Chris Studer, communications and marketing director of the South Dakota Farmers Union, said fluctuations in weather have been harmful to agriculture because they have been so difficult to predict. A few years ago, extra rain and the floods it caused were a bane to farmers and ranchers.

Between 2008 and 2011 the federal government paid South Dakota farmers more than $1 billion under this system. The drought of 2012 was equally deleterious.

“It was most severe in southern South Dakota, where a lot of farmers either had small crops or none at all,” Studer said.

In northeastern South Dakota, however, the drought did not do so much damage, and in fact many farmers had a boom year. The reason why may point to one way for farmers to try to minimize the damage that comes with climate change.

Cropland in northeastern South Dakota made it through the year on subsoil moisture. Edwards counsels farmers to minimize tillage to allow soils to retain moisture, which will help ameliorate the effects of the next drought. Studer says practicing no-till also minimizes farmers’ use of fossil fuels.

“Farmers can implement conservation practices that store carbon in the soil. That’s a big way they can have an impact,” Studer said.

Edwards also advises farmers “to do more with their land.” Land in pasture, for example, benefits from extra rain in a way most crops cannot: Grassland absorbs extra rainfall and puts it into more grass production, while at many times of year extra rain on cropland simply runs off. For this reason, years of extra rain have been a boon to stockmen.

Fred Kirschenmann, a leading thinker about the future of agriculture, says that in the face of climate change, the focus for farming should be on increasing the resilience of our systems.

“If you want to make your farm resilient for the future, you have to think about it in two ways,” Kirschenmann said in a recent interview with Yes magazine. “First, there’s ‘specific resilience’: I look at my farm in North Dakota and say, ‘OK, in North Dakota now, and in the future, we’re likely to have a more unstable climate and to see the end of cheap energy. So how should I redesign my farm, so it can be resilient under those specific new circumstances?’

“Then there’s ‘general resilience,’ which none of us can predict. We think about what’s the larger global impact of climate change, and how we can begin to think about building more diversity and more redundancy into the system, so that we have more flexibility to respond to whatever comes along.”

Kirschenmann advises that this effort should start with soil health, so that the soil can bounce back after years of drought or excess rainfall.

The weather suggests business-as-usual might not be adequate: For example, the U.S. Drought Monitor shows that as of Feb. 26, nearly 24 percent of North Dakota and nearly 87 percent of South Dakota was in moderate to exceptional drought.

It looks like the superlatives in our weather reports aren’t going away anytime soon.

Christopher Cumo is a freelancer and author of three books and a number of articles, essays, reviews and short stories.