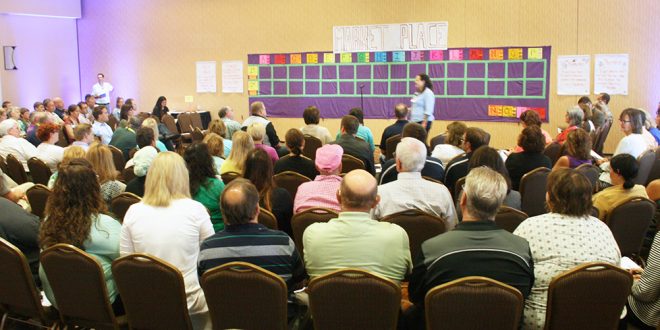 Participants set the agenda of conversations for an afternoon at RuralX, held July 19-20, 2016, in Aberdeen, S.D., through a process called Open Space. Photos by Heidi Marttila-Losure/Dakotafire Media

Until recently, a whole lot of community-minded folks who were hard at work in the crooks, crannies and corners of South Dakota may have been thinking they were alone in their desires to make their communities better.

“The big challenge of being rural is … just the distance between us,” said Heidi Marttila-Losure, publisher and editor-in-chief of Dakotafire Media, in a video from the event, created by Pinnacle Productions. “The advantage that cities have is that there is a concentration of people in one place that you can bounce ideas off of and get inspiration from. RuralX is really … bringing everybody in that same place and creating a … city-like experience for a day.”

After converging in Aberdeen July 19-20 for RuralX, an event created by the nonprofit organization Dakota Resources to bring together folks’ RuralX-periences, those do-ers were empowered by a network of other do-ers, ready to do and create together.

RuralX’s focus was bringing the people and ideas together that could help promote rural Dakota life, but the event was a bit different than most gatherings of economic and community developers. Inspiring presentations and insightful speeches were sprinkled into the days’ activities, but the bigger focus centered on conversations.

Hugh Weber, CEO of OTA and the Institute of Possibility, spoke about the power of networks at RuralX.

So if the goal is making rural communities better, change-makers will have more energy, creativity and motivation to succeed if they are connected with others who share those goals.

McCray took it a step further in her presentation with business partner Deb Brown, saying that multi-tiered relationships are key to community-building.

“Make the connections within our community among all the experimenters, and then build the connections outside your community,” McCray said. “It’s not that other places don’t have opposition. … That committee of negativity is still meeting—they are still complaining, but fewer and fewer people are listening to them, because the center of power has shifted … to you when you gather your crowd and you … find the people who are willing to take small steps with you. Then, you have a dozen people—20 people, 100 people, all taking small steps, all trying things out, all experimenting with you.”

The summit’s events inspired some RuralX-goers to look beyond that committee of negativity in their own work.

“For me personally, getting beyond that ‘people don’t support me’ (notion) because three people don’t support me” is difficult, but important, said entrepreneur Liz Hannum of Aberdeen, S.D. “The people who are naysayers usually have the power in town, and can make or break a project I’m working on. Connecting with them can be difficult, and I tend to get hung up on that, rather than trusting my supporters.”

Organizers recently announced that the second RuralX Summit will happen in Aberdeen in July 2017. 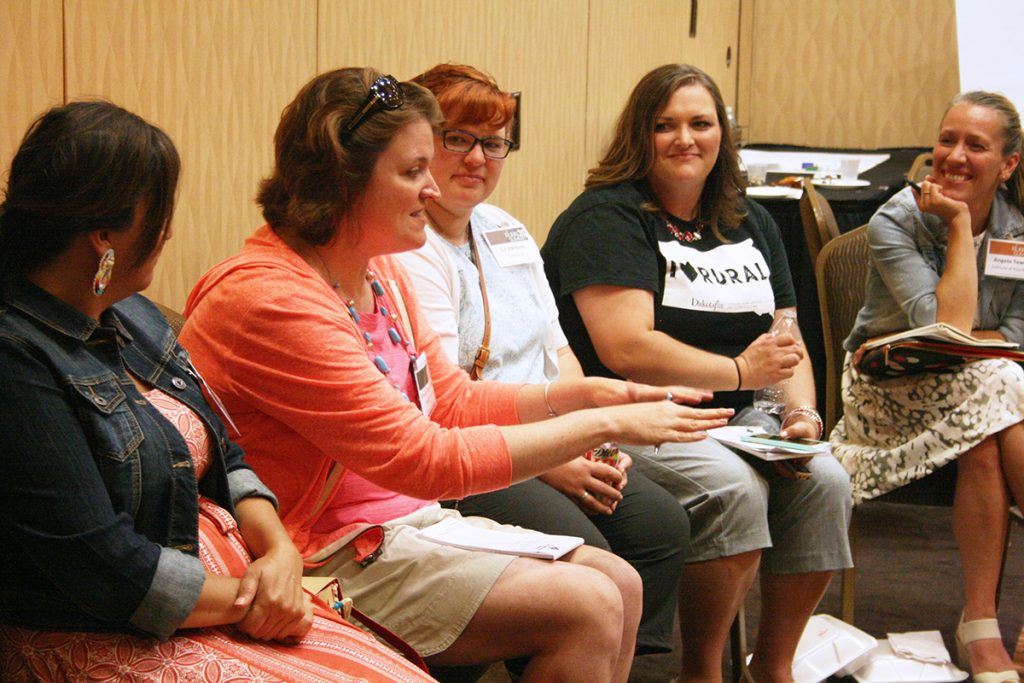 Emily Pieper, second from left, tells her story at RuralX in Aberdeen in July. Pictured with her, from left, are Eileen Briggs, Liz Hannum, Wendy Royston and Angela Tewalt. Photo by Heidi Marttila-Losure/Dakotafire Media