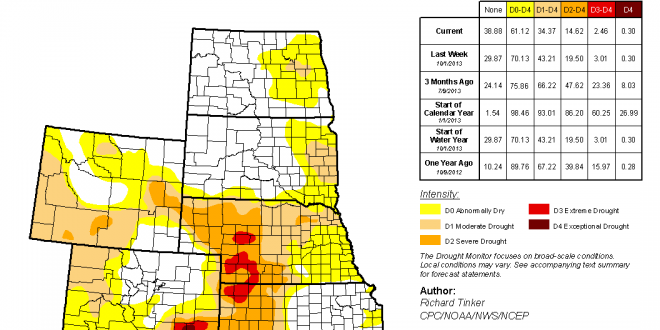 (NPN) – Though it was way too much of a good thing, recent snow and rains greatly improved South Dakota’s drought situation.

According to the U.S. Drought Monitor, heavy and record setting precipitation fell this past week in the High Plains Region. In South Dakota, a blizzard set several snowfall records, including in Rapid City, which had a snowfall measurement of 23.1 inches over a two-day span.

In the region as a whole, all categories of drought continue to improve with the exception of extreme drought (D4), which continues to remain constant at 0.3 percent of the Region. The area of moderate drought (D1) or worse improved by another 9 percent this week, to total 34.37 percent. Another 5 percent improvement in area of severe drought (D2) occurred this week as well.

South Dakota had major improvements this week, with heavy amounts of precipitation falling across the entire state. In western South Dakota, where the heavy, wet snow fell, a majority of the abnormally dry (D0) and D1 conditions were eliminated. Also, along the Nebraska border an area of D2 was upgraded to D1 or D0. In eastern South Dakota, a large portion of the D1 area that has been plaguing the area for the past few months has reduced considerably. In eastern North Dakota, the area of D1 was reduced considerably as well. Only 2.22 percent of the state remains in a drought type condition.