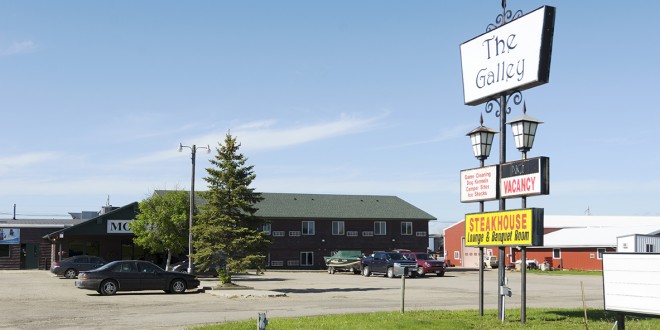 People Still Gather at the Galley, Thanks to Local Investors

When the Bunkhouse Motel and Get Away along Highway 12 in Webster was set to close, a group of people came together to save it. Nine shareholders went together in 2007 and reopened the business as The Galley Steakhouse, Lounge and Hotel.

“We figured Webster needed a place to hold (events and) receptions,” said Josh Bartos, one of the nine shareholders.

“We just kicked it around for a bit (and) just got enough people together who were interested,” said fellow investor Ben Braaten. “We wanted to keep some jobs in the community.”

“We were all business men, but as far as the bar (and restaurant) business goes, we had no idea,” Bartos admitted. “We bought it as a way to keep the place open.”

They have a president and a board of directors, and the business is managed by a supervisor for each the bar, kitchen, waitress and motel. They employ about 40 people.

“The employees and supervisors are the heart and soul of (this business),” Braaten said.

While they have shareholder meetings with the supervisors, Bartos said that a downside of this type of business structure is when ideas get lost in communication between so many people.

Braaten added, “With this many people, there can be different ideas on where to take the business…”

“…But it’s whatever the majority decides,” Bartos added.

So far, there have been no major conflicts, and that has to do with everyone being friends and just wanting the best for the business.

“We try to keep everything positive,” Braaten said.

The shareholders all agree upon improvement, and Braaten said they are striving to be better and better all the time.

“We’re always looking for ways to improve,” he said.

Bartos said, “We really depend on our supervisors and employees. They watch out for that place as if they were the owners, more than we do I think.”

Braaten agreed, saying, “They take ownership in their jobs.”

They are open to considering another business structure, however. Bartos said that a couple with a family who were interested in running the business would be ideal.

“That’s what the place was initially set up for,” he said.

“If the right couple came along, it would be an excellent opportunity for them,” Braaten added.

Alternative Business Models Bunkhouse Motel and Get Away Lounge and Hotel Shareholders The Galley Steakhouse 2013-07-10
Webmaster
Share !
Previous: At Dakota Foundry, Employees Are Also the Bosses
Next: Postcard: Taking on the South Dakota Gran Fondo
Scroll To Top