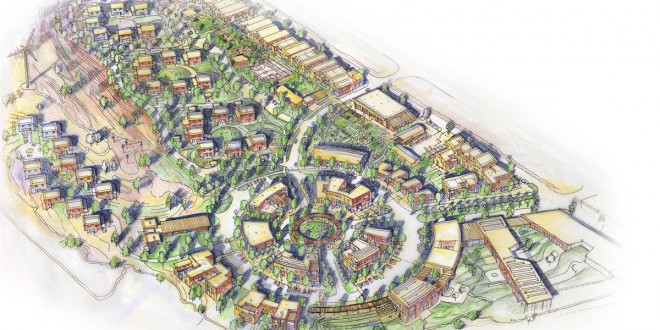 The form of Thunder Valley’s Regenerative Community builds on traditional patterns of Lakota living. The community will be built in phases; the first phase includes one of the housing circles shown in the center of the top half of the sketch. Architectural drawing by BNIM

Full circle: Thunder Valley looks back and forward as it reimagines how to live in community

This spring, seven homes will be built in a circle facing each other, re-creating a cultural and physical pattern of living in community that has until now been lost to generations of Lakota.

As part of the larger Thunder Valley community being built by tribal members on the Pine Ridge Indian Reservation, these homes continue a masterpiece in development, community organizing and planning by and for the people of the reservation.

As with any masterpiece, though, the beginning was simple: They started with a blank canvas and let their imaginations soar. And that approach could work anywhere in the Dakotas.

For those who would replicate Thunder Valley’s community-led development model?

“Be committed to being a lifelong learner in the process, because my beliefs have changed a lot in 10 years,” said Nick Tilsen, executive director of Thunder Valley Community Development Corp. on the Pine Ridge Indian Reservation.

Choosing how to live 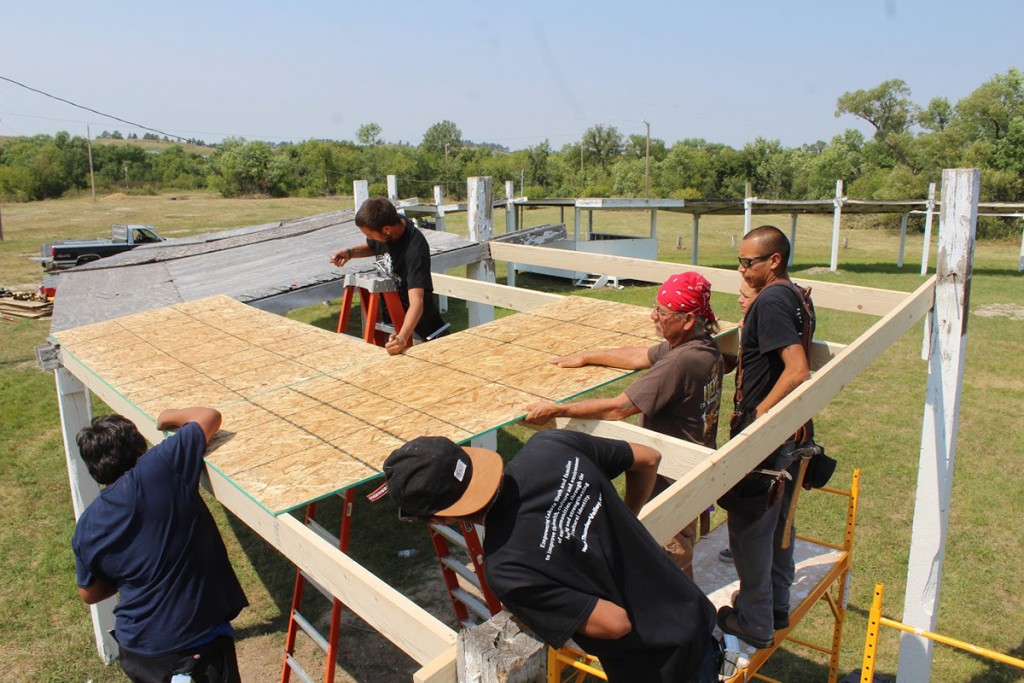 Working together on projects such as this repair of a shelter at local powwow grounds is part of the ethic encouraged by Thunder Valley. Image courtesy Thunder Valley

Tilsen didn’t wake up one morning with an idea to build a nonprofit-led housing development and retail center on his home reservation of the Oglala Sioux Tribe.

A ceremony over a decade ago challenged him and fellow tribal members to make a future for the youth, who make up over 50 percent of the reservation’s population. Their journey ultimately led them to buying non-trust, deeded land in the heart of the reservation where they building structures to support a new way—built on a very old way—of living in community.

The ability to choose how to live is a historical issue still traumatizing tribal communities in the Dakotas—in particular the Oglala band of the Oceti Sakowin Oyate, one of several bands that negotiated with the United States via the Fort Laramie Treaty in 1868. That treaty was crushed in the quest for gold and land, with military conflicts culminating in forced settlements on various reservations.

The problems didn’t end there. Dividing tribes into individual households further broke up the extended family system of the nation, the tiyospaye, by assigning land to nuclear families often not next to other tiyospaye members, via the Dawes Act of 1887.

Reservation land was then opened to non-Indian settlement.

Thunder Valley is working to answer that need by reclaiming a few acres of land to build a 21st-century Lakota community—physical space for the collective imagination of youth and other tribal members willing to step into a place of greater self-determination.

The community will consist of various types of mixed-use buildings and facilities, as well as rental and Thunder Valley staff housing, but the core strength of the nonprofit’s endeavor is homeownership.

Thunder Valley seeks to be a model community for all of Pine Ridge and anywhere else in need of activist development, boiling down their core ethic to the triple bottom line—people, planet and profits.

Seeing that as the unifying Lakota virtue for Thunder Valley, Tilsen cautioned that how that principle is acted upon will differ based on the community seeking to implement it.

“It will be different because the genius and the assets of that place would be different,” he said. 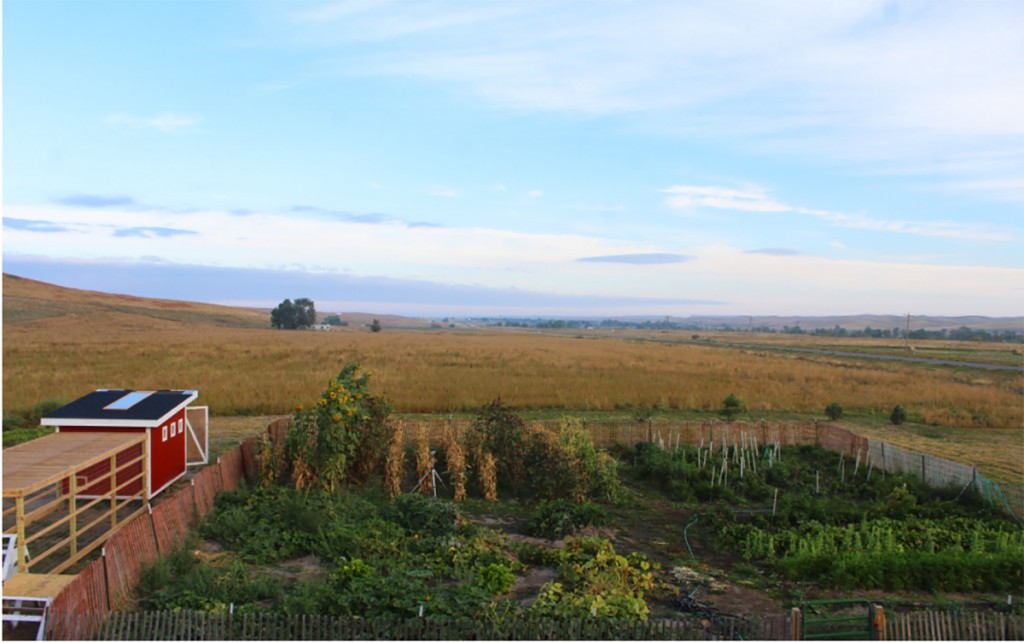 Just beyond Thunder Valley’s garden and chicken coop (part of its food sovereignty work) is where construction on new homes will start this spring. Image courtesy Thunder Valley

Bridges a part of community building

Building a collaborative community imagination has paid off in very practical ways—in finding funding, for example.

Though the effort is led and mostly staffed by American Indians, Thunder Valley is a nonprofit, not a tribal program or tribally chartered entity.

That means Thunder Valley accesses funds in the same way as any other nonprofit organization. Thunder Valley benefits from 30 to 40 funding sources, including U.S. Department of Agriculture rural development loans and grants.

Banking is also a critical issue when working to create homeownership opportunities in Indian Country. What happens if people can’t get a mortgage?

That’s where the creative energy of Thunder Valley’s community organizing and its established practice of creating win after win, in a place where people are often sold unfulfilled promises, has paid off.

These tiyospaye-inspired circles of homes will feature mixed-income families and housing association agreements in a way that guarantees the homes not only won’t lose equity after construction, but ensures families will come home in their own way.

The homes’ energy needs, including heat, will be more than 90 percent off-grid via solar panels on the homes owned by the non-profit. This is a huge change, considering most tribal housing still uses propane or fuel oil for heat. Homeowners will pay for their share, but the savings will make homeownership affordable. That’s part of the triple bottom line, showing that putting the needs of the earth in focus also helps the humans in the community. 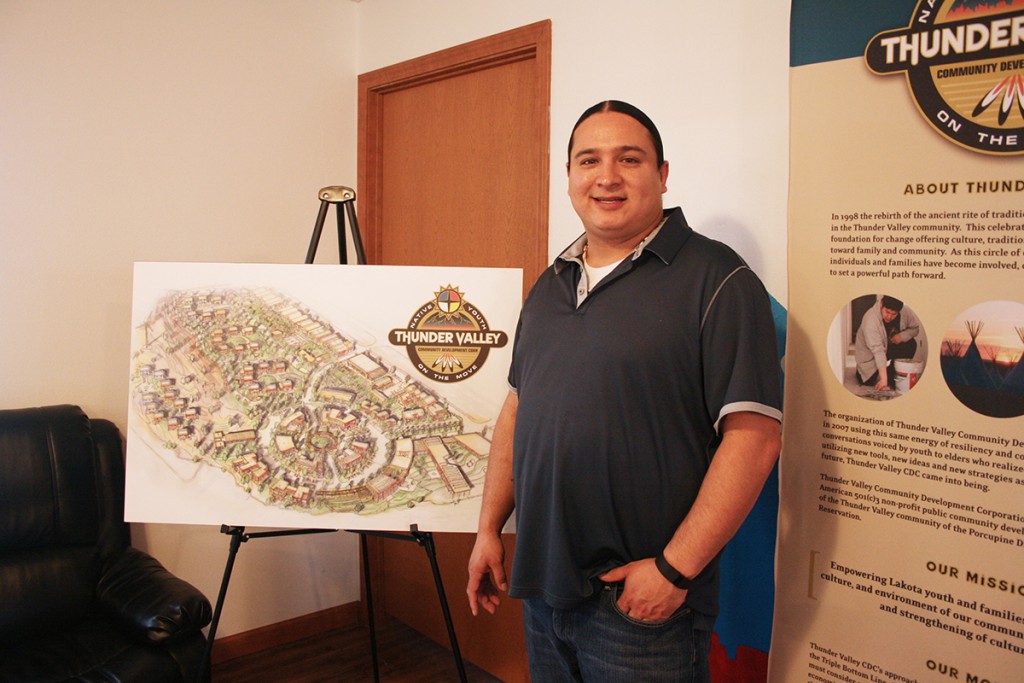 “Early on, we decided we didn’t want to do Band-Aid work. So, we began to look around and ask, ‘Why are things like this here?’”
—Nick Tilsen