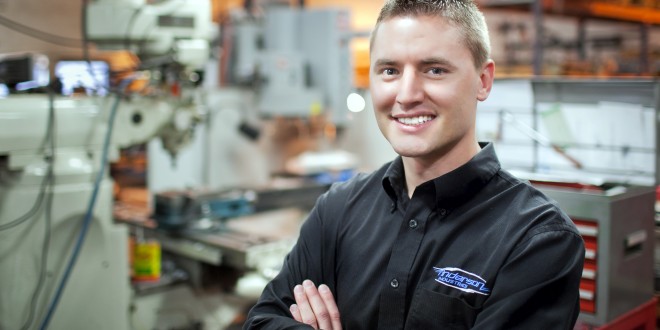 Entrepreneurial strategy 1: Build on a product line that’s proven its worth.

Kory Anderson has the typical beginning to his entrepreneurial story: He started his business in his garage.

Anderson, 28, started Anderson Industries five years ago with one employee helping him in his garage in Andover repairing heavy equipment. After about two years, he began manufacturing foundry patterns and tooling for iron castings.

Today, Anderson Industries has 30 employees working in the former K.O. Lee building in Aberdeen. The company makes agricultural equipment, parts for farm implements and machined items for other firms.

Being named a Dakota Rising Fellowship winner in 2009, with the customized support it offers to entrepreneurs, was one contributor to Anderson’s success.

Since then, his company has continued to expand its metal fabrication and machining capabilities. The 20,000-square-foot leased space in Aberdeen is filled with computerized machines that cut metal and mill parts. Human welders and a robotic welder work side by side.

“We have been very fortunate,” Anderson said. “Our business has been able to grow, and we anticipate it continuing to grow.”

The most popular product is still the opener, Kory Anderson said. It opens and loosens the soil, places fertilizer in the ground, then places the seed on the firm seedbed at the desired planting depth.

“The way it places seed and fertilizer allows farmers to get better yields,” he said.

Another of his father’s business ventures has been a pipeline of orders to Anderson Industries.

In 2000, Kevin Anderson formed a partnership with Horsch, a German company, to make implements in Andover. Horsch is one of the largest manufacturers of agricultural equipment in Europe. Horsch Anderson Equipment in Andover makes high-speed tillage systems, hillside planting systems, commodity air carts and other farm equipment.

The business used to buy all the components for its implements from outside sources. Now Anderson Industries makes most of them.

One reason Anderson Industries and Horsch Anderson have succeeded is because the products have been designed by farmers, Anderson said. The Anderson family farms about 5,000 acres south of Andover.

“We are out there in the dirt and know what farmers need,” Kory said. “It gives us a market edge. Our company fills a niche. We are not looking to make a corn planter to compete with John Deere.”

In addition to leading Anderson Industries, Kory Anderson is president of Horsch Anderson. In December 2009, he bought the family shares of that company. He oversees more than 50 employees at the two companies.

“Our goal is to keep growing,” he said. “We love to innovate. That is what we like doing.”

To accommodate its significant growth, Horsch Anderson, LLC, broke ground on a new manufacturing facility in Mapleton, N.D., on Aug. 25. The plant is expected to employ 80 people within the first two years and as many as 300 within five years.

“The new facility will add capacity to our current plant in Andover,” Kory Anderson said. “We’re excited to become a major employer and good corporate citizen for the city of Mapleton.”