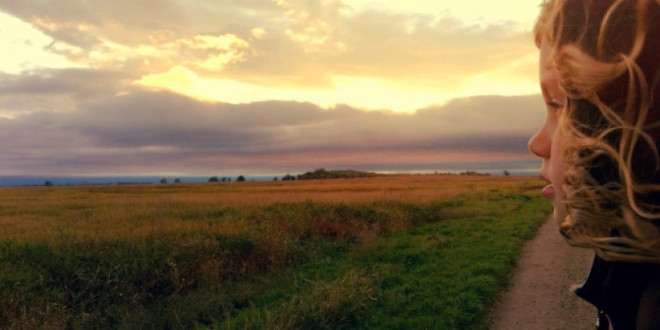 Sofia Losure, 7, looks out at the October evening sky near Frederick, S.D. Photo by Heidi Marttila-Losure

Editorial: In a Good Light

One evening this fall, as my daughter and I were driving home from dropping my son off for just a little more time in the tractor with my husband, we just had to pull over.

The sky, which had been mottled shades of bluish gray on our way to the field, was suddenly alive with color. The setting sun had dropped below the level of the clouds and was breaking through a gap above the horizon, lighting those clouds with a vibrant yellow. I took photos with my iPhone camera as my daughter leaned out the car window, her hair blowing in waves that mimicked the clouds.

I was amazed at the pictures when I looked at them later. They were arrestingly beautiful images. I also knew they were not that unusual, though they were particularly good examples. I go walking often with my iPhone in my pocket, and I’ve taken dozens of stunning photos from that walking route along a gravel road. It’s an iPhone camera; no special skill is required. I just regularly happen to be under the ever-changing tapestry that is the Dakota sky.

Something about the air and land here makes for particularly beautiful scenery—scenery that might otherwise be ordinary or monotonous becomes breath-taking. That something is the quality of light: light that saturates all it touches with deep yellow, and as twilight descends, touches of orange, pink, red and purple.

I may appreciate this beautiful light more because I was away from the Dakotas for 12 years and missed it. No other place where I have spent enough time to fairly judge has the same quality: Not North Carolina, which has stunning beauty in other ways, but which has a hazy quality in the air (hence the name “Smoky Mountains”) that mutes the light. Not Finland or northern Minnesota, where forests block the late or early sun and make vistas much shorter, except for lovely lake views. Not Iowa, as the air is most often hazy there also, perhaps in part because of all the corn transpiring moisture.

Something like our lovely light perhaps happens in some other places, but from my experiences at least, it is not commonplace.

I am not the only one who thinks so. Creative Director Troy McQuillen and I had strangely similar experiences: Both of us have had a visitor from the Los Angeles area come to South Dakota and notice the beauty of the light here. Perhaps those who have lived here always are used to it. Those who are new here are often stopped in their tracks the first time they glimpse the light illuminating a haybale or an old barn.

Many artists, including a number of those featured in this issue, do see this beauty and let it inspire or illuminate their work. But I am not sure why our light doesn’t have a starring role in more ways.

I wonder often why more architects don’t plan buildings to take advantage of this exquisite light, working changing shadows into the design. Film-makers could create a sense of drama just from the backdrop. Landscape photographers could get many beautiful shots here in one evening, and portrait photographers could make anyone beautiful in our morning or evening light. De Smet has built upon the heritage of Harvey Dunn’s birthplace nearby to create an outdoor painting festival each August, but every community in the Dakotas could do the same.

Our Dakota light is a gift.  We can use that gift to make our communities livelier and more beautiful, as such use shows our appreciation for the gift. After all, such a blessing should not go unappreciated.

I will suggest that pulling over once in a while to take it in might be a good place to start.

Many of you know that the Dakotafire project was started through the Knight Community Information Challenge, with funding provided by the Knight Foundation, the South Dakota Community Foundation, and corporate and individual sponsors. We are now in the third year of our three-year grant period and are making some changes as we move toward standing on our own.

One change is that Dakotafire will become a bimonthly magazine instead of a quarterly. We’ll publish six issues a year, though in 2014 we’ll only have five issues because the production schedule for this issue and a January/February issue would overlap. We hope you’ll appreciate Dakotafire’s more frequent appearance in your homes.

Second, starting with the March/April issue, we are going to try a new way of engaging with our readers and our communities. After each Dakotafire issue, we’ll have an event in one community to discuss the magazine’s featured topic. Details are still being worked out, so I won’t say more, except that we are really looking forward to these conversation-starting events.

Third, we are asking you readers for your support. Our goal is “sparking rural revival one story at a time,” and it’s important as we strive for that goal to get as many people as possible involved in the conversation. Inserting in local newspapers helps us reach a large audience. But it also means that we don’t have subscription revenue from people who are fans of what we do. If that describes you, there’s now a way to show your support: Give a donation of any amount and have your name published in the next issue of Dakotafire as one of our FiredUp readers (or those quiet givers among you can remain anonymous). Give a donation of $25 or more and get a lovely Dakotafire travel mug to show off your support as you tote your morning coffee.

Those of you who get Dakotafire through a subscription (not through a newspaper insertion) can become a FiredUp subscriber by giving an amount above the regular cost of the subscription.

As we also pursue additional advertising and sponsorship as sources of revenue, we know we’ll also answer to FiredUp readers and subscribers who have invested in us.

We hope that over the past two years, we’ve started some good conversations in your homes and communities about how we can make our places better. We thank you in advance for your support as we continue those conversations.