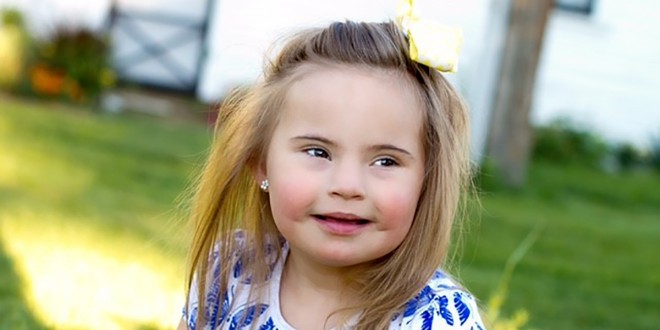 Three twenty-one is a day to be celebrated in our house. March 21 is World Down Syndrome Day, chosen to represent the third copy of the 21st chromosome, which results in the genetic condition known as Down syndrome.

Trisomy 21 came into our lives almost six years ago. Since then, we have had the opportunity to grow and learn as a family. Our daughter, Ruby, has opened our eyes to a life and family we never had imagined.

We received a prenatal diagnosis at about 27 weeks. It’s been said that many families go through a grieving process upon receiving a Down syndrome diagnosis. I can honestly say that we never felt that way. At our 20-week ultrasound, it was discovered the baby had a two-vessel umbilical cord (as opposed to a typical three-vessel cord). My husband and I were given the option of meeting with a perinatologist to pursue further imaging. Because of the possibility of heart defects, we went ahead with the appointment. After taking some ultrasound images, the doctor came into the room and told us based on what she saw, she believed the baby had either Trisomy 13 or Trisomy 18. She told us neither of these were compatible with life, and the baby would likely die in utero or shortly after birth. She recommended doing an amnio to confirm her findings. We did it right then and were told to expect the results within a week. Three days later, we received a phone call with the results: Trisomy 21—Down syndrome! We celebrated this diagnosis. We were still going to have our baby, and our 2-year-old, Norah, was still going to be a big sister. A Down syndrome diagnosis was nothing to grieve for us, and never has been. Ruby was born in October (Down Syndrome Awareness Month) 2010, and we have learned to celebrate the big and the small.

Having Ruby in our lives, we have learned to appreciate the little things. We focus on what she can do, not on her limitations. While learning can be a challenge, Ruby shows us daily that she still has a great sense of humor, a flirty side, a stubborn side, and many other characteristics that make her special. One of the mottos of the National Down Syndrome Congress is “More Alike Than Different.” Ruby proves that every day when she shows that she is just as fun, caring, loving, and even as naughty as peers her age.

Having a child with Down syndrome has given us a special connection to families locally, nationally, and even around the world who also have children with genetic conditions. As a family, we make an effort to attend the National Down Syndrome Convention held annually at many locations all around the U.S. We have gone to Washington, D.C., Denver, Indianapolis and Phoenix since Ruby’s birth, and have had the opportunity to learn from some of the leading experts in the field regarding raising a child with Down syndrome and the challenges we may face. We have also formed many special bonds with the family of members who also attend these conferences.

When we received the diagnosis that our child wouldn’t survive, our world was torn apart. Little did we know that through a genetic condition known as Down syndrome, our lives would be rebuilt, becoming greater and more fulfilling than any of us could hope. We have truly been given something to celebrate.

Emma Bouza and her husband, Ben, grew up in Tripp and Parkston, respectively. They now reside in Iowa.

In every other issue of Dakotafire, we feature a “Postcard”—an evocative, (ideally) short story about an event, person or place, written as if you were telling the story to a friend. Some ideas: outdoors stories, the highlight of a big game, or a moment in history. Story must have a photo to accompany it. Digital images (a minimum of 1000 pixels wide) are preferred; you can also send a photo by mail. E-mail submissions to heidi@dakotafire.net, or mail to Dakotafire Media, Postcard Submission, PO Box 603, Frederick, SD 57441.

2016-03-30
Webmaster
Share !
Previous: From the Editor: Building confidence
Next: Seniors to seniors: Generations connect to make a better community
Scroll To Top