No one thought the new school lunch changes would go through without some grumbling.

“Naturally, some places are adjusting to the new standards more easily than others,” read a fact sheet sent out by the USDA after the changes were introduced last year. “Patience and support are needed, particularly in this year of transition.”

Even the federal-level implementers, however, might have been surprised at the strength of the backlash in some schools—including some schools in the Dakotas: Viral videos about students fainting from hunger, a fourth-grade lunch boycott, and a homecoming candidate wishing for nothing more than a piece of white bread at lunch were among the responses.

The objections led the U.S. Department of Agriculture in December to relax the rules on meat and grains for a year. The looser rules are not permanent, however—perhaps because some schools had little trouble adjusting to the new rules, according to an April Time magazine article. 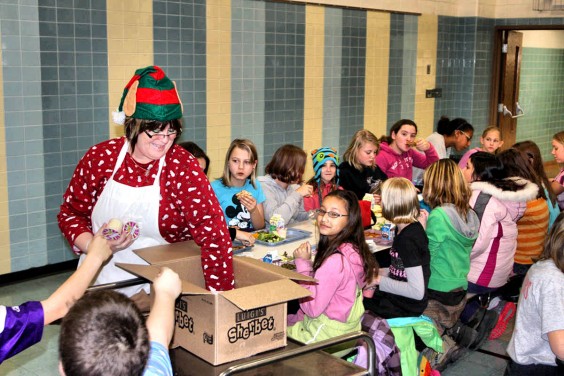 Britton-Hecla, in Marshall County, S.D., was one of the schools that chafed at the new rules. The calorie restrictions left students hungry after eating what they were served, so they filled up on peanut butter and jelly sandwiches. PB&J can be offered as a supplement, explained Superintendent Kevin Coles.

“Nobody has come up to me and said they wanted more food, but I think the reason is that we serve peanut butter and jelly every day,” Coles said. “That’s one of the things you can do if you pay for it out of the general fund, but it’s also one of the things that’s difficult to understand if this is all about healthy calories.”

The viral video portraying students wasting away from hunger was put together by high school students in Kansas, but closer to home, fourth- and fifth-graders in Groton, S.D., planned a lunch boycott and advocacy campaign this spring.

On one school day, 16 of 22 Groton fourth-graders brought their lunch in protest. The fifth-graders are sending letters to their state and national legislators.

The homecoming-related objection came in Langford, S.D.: “The homecoming candidates were asked what they would want if they could have anything,” explained Superintendent Monte Nipp. “One of them said they just wanted a piece of white bread a lunchtime. That really sums it up.”

Nipp sees the program as flawed in its design. “The theory is that you feed more fruits and vegetables to kids and they are supposed to fill up on that,” Nipp said. “But in reality they are not going to eat two cups of something they don’t like. And now when a high school boy gets only one hot dog, by 2 p.m. he’s starving. … The real purpose of the lunch program is to feed children so that they can concentrate on their studies and be all that they can be. As an administrator, when you know a kid is walking away hungry, it’s kind of hard to say that they learned their lesson today on how to eat properly.”

One change in the rules states that students have to be given full servings of fruits and vegetables. Lots of those fruits and veggies end up in the garbage can, Nipp said.

Both Coles and Nipp said the fact that students could purchase extra food didn’t seem to align with the stated goals of the program.

“I think (the new rules are) discriminatory,” Nipp said. “When we serve one hot dog, 90 percent of the school boys go back and buy another hot dog, which isn’t really changing the meal pattern. But students on free and reduced meals can’t afford to do that. We’ve made it so that if a student has the money (he or she) can overeat.”

Nipp isn’t the only one who questioned that standard. In February, the USDA proposed a rule for vending machine fare and also a la carte items available for purchase during lunch service but not part of the regular meal. The agency sought feedback on those rules, and USDA officials are now sifting through those comments, which were due April 9, according to an article in Education Week.

Many of the comments by nutrition advocates worried that allowing too much flexibility for a la carte items meant schools or food industry lobbyists could circumvent the new rules altogether and negate the health benefits they provide. The School Nutrition Association, however, wants any food item that meets the requirements for the main meal to also be available a la carte without further restriction.

The USDA will issue a final rule when they are done with the comment review process, but if that doesn’t happen by June 30, the change won’t take effect until at least the 2014-15 school year. 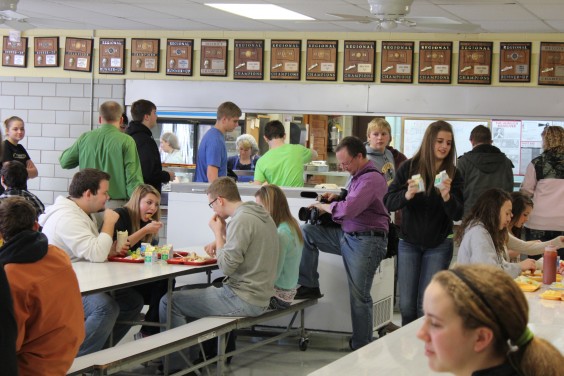 A film crew accompanied Kyle Ortmeier, seated at left, to school in January to film a segment for a documentary focused on his work in implementing healthy school lunches. Photo by Faulk County Record

While several schools had a lot of pushback to the new rules, in Faulkton, S.D., and Kulm, N.D., the requirements were implemented without much difficulty. The way they implemented the changes may be part of the reason for this easier adjustment.

Giesler, who has been the cook at Kulm for 22 years, said she believes the adjustment went more smoothly because she had slowly been making changes before—offering more fruits and vegetables at the “help yourself” salad bar, for example. There were initial grumblings from students when changes were implemented, but when they ate all the fruits and vegetables offered to them at the salad bar, they felt full and did not complain about being hungry.

The process in Faulkton was influenced by having student Kyle Ortmeier involved. He had recently gotten the school on board with the Alliance for a Healthier Generation, which describes itself as “a catalyst for children’s health. We work with schools, companies, community organizations, healthcare professionals and families to transform the conditions and systems that lead to healthier kids.”

Joining the Alliance had the school considering health effects in its decision-making before the new school lunch rules had to be implemented.

Ortmeier serves on the national board for the Alliance, which was a significant help for the school as they considered changes, said Dr. Joel Price, superintendent for Faulkton Area Schools. “With somebody like that on a national board, it granted the district information resources we wouldn’t otherwise have had,” Price said.

Ortmeier, for example, called upon Kari Senger, the director of Coordinated School Health at the S.D. Department of Education, to help the school set up the reporting for the new lunch plans online.

“I think a lot of the difference (between Faulkton and other schools in implementing the rules) was that the school was very open and above board with everybody about what was going on from the beginning,” Ortmeier said. “Dr. Price and (FHS) Principal Mr. (Craig) Cassens spoke to all of the students about the changes, made it clear what was going on and kept everybody informed along the way. People did bicker or complain about it for two weeks, but then the complaints died out.”

Marion Nestle, a nutritionist who has written extensively about the school lunch changes, advocated this approach in an e-mail exchange with Dakotafire.

“(Making dietary changes more palatable) requires committed communication strategies,” Nestle wrote. “Schools that have succeeded in making huge changes to school meals without causing a revolt usually have food directors who talk to parents and kids about what the changes are for and ask for a grace period. If the food tastes good, the kids will eat it, no question.” 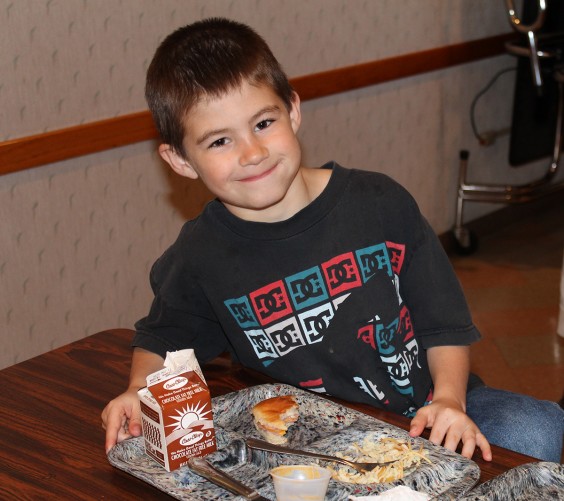 Good-tasting food may be a factor in Kulm, as Giesler cooks almost all the meals from scratch. Nestle noted that it’s significantly easier to provide tasty, filling meals if schools are cooking from scratch than if they are relying on processed foods, which often pack lots of calories but few nutrients into a small package.

The students at Groton, for example, started their lunch boycott after they objected to how little was on their plates when they were served popcorn chicken and popcorn shrimp—both calorie-dense foods that do little to fill up stomachs.

Ortmeier said having a salad bar, such as the one in Kulm, can help students fill in the cracks if the main meal left them hungry. This can also help ensure that students who may not get enough nutrition at home can get the extra calories and, perhaps more importantly, the nutrients they need at school.

Having a “champion” for healthy living in the student population likely made a big difference in the way the changes were viewed in Faulkton. For example, when students complained after the school instituted a policy of no high-sugar or high-caffeine soda or sugary snacks during school hours, Ortmeier said his friends’ complaints were based on addiction symptoms.

“Someone said something to me about it, and I said, ‘Dude, the reason you feel rotten is that you’re sugar crashing and you’re having caffeine withdrawals,’” Ortmeier said. “Long-term, my friends, classmates and fellow students don’t need that. These changes are in no way trying to hurt anybody, but to make the school healthier. Healthier students mean better athletic and academic performance. It’s been scientifically proven that healthier students do better in school.”

A recent study published in JAMA Pediatrics suggests that school lunch requirements similar to the ones that went into place this year help keep kids at a healthier weight. [9]  In schools with such requirements, students eating free or reduced-price meals were 12.3 percent less likely to be obese than those who didn’t eat those lunches. The study focused on low-income students because they are more likely to be obese (which is likely because less nutritious food tends to be cheaper than healthier options).

Nestle wrote an editorial to go with that stud [10]y.

“If you take junk food and sodas out of schools, kids don’t eat as much of them and are healthier. If you have strict nutrition standards for school food, the food is healthier and so are the kids,” Nestle wrote. “This may all seem self-evident, but now we have research to prove it.”

And with these new standards, students all across the nation are going to benefit. Whether they like it or not.

What do you think? How have lunch changes gone over in your local school? Share your experience at Dakotafirecafe.com [11].