A docudrama performed at the Webster Armory in April brought to life what could happen to teenagers when drinking and driving mix. Tyler Hagen and Derek Clausen play crash victims. Photo by Reporter & Farmer

Spring is a time of many milestones for teenagers and their families, and while it’s a happy time, it also makes Britton-Hecla Secondary Principal Shad Storley a little nervous.

“The scariest time for me is at prom and graduation time every time the phone rings,” Storley said. “Your heart skips a bit. Kids think they are invincible at times, but (tragedies) can always happen here.”

They can, and they do. An alcohol-related crash in Faulk County on February 11 [1] involving two people under the age of 21 resulted in a totaled pickup, but luckily the two in the crash only sustained injuries. There are, however, many crashes involving young drivers that do result in fatalities: Of the 112 fatal crashes reported in South Dakota in 2009, 20 of them involved drivers under the age of 21 [2].

Parents might hear these statistics and shudder, but they might also feel resigned to the inevitable: Teens will be teens, right? They will rebel and take needless risks until experience teaches them otherwise, and there’s not much parents can do about it—just give them good information and hope they make the right decision.

New research on the workings of the teenage brain suggests that parents can do far more to keep their teens safe than just hope for the best. The key is understanding that in certain situations, teens are under intense pressure from their own brains to make unsafe decisions, and the best strategy for parents is keeping kids out of those situations altogether. 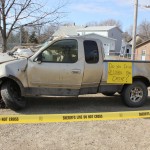 [3]
OBJECT LESSON: This truck was in a crash in Faulk County that resulted in injuries. Photo by Faulk County Record 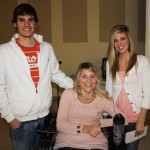 [4]
LIFELONG STRUGGLES: Jennifer Addis, center, who became a quadriplegic as a result of a crash caused by a drunk driver, told her story at Faulkton High School in January. She’s pictured with two of her hosts in Faulkton, Conner and Cortney Hardie. Photo by Faulk County Record 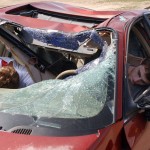 [5]
DRAMATIC EFFECT: A docudrama performed at the Webster Armory in April brought to life what could happen to teenagers when drinking and driving mix. Tyler Hagen and Derek Clausen play crash victims. 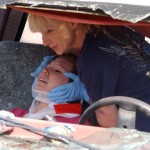 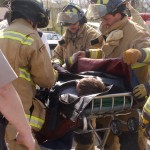 [7]
Volunteer firemen close up a body bag during the Webster docudrama. Photo by Reporter & Farmer 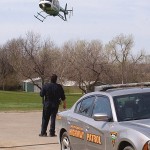 [8]
Crash victim Tyler Hagen was airlifted to the hospital (in a simulation) where emergency room doctors and nurses attempted to save his life. The CareFlight helecopter from Aberdeen touched down on the golf course. Photo by Reporter & Farmer 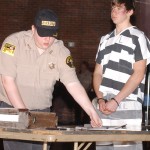 [9]
After the crash, the focus of the docudrama shifted to the booking room, where the drunken driver, Brandon Ness, was determined to be driving under the influence. Photo by Reporter & Farmer 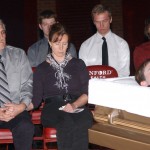 [10]
Derek Clausen’s father and mother, Kurt and Karen Clausen, also played a role in the docudrama as grieving parents. Here they are at the funeral service, with Clausen’s classmates and pallbearers behind them. High school students from Webster Area and Waubay helped stage the event. Photo by Reporter & Farmer

How teens respond to risk

Researchers have been trying to figure out why teenagers break rules and seek thrills for decades, and in recent years they’ve come to some interesting conclusions.

For example, according to Laurence Steinberg of Temple University, teenagers don’t take dangerous risks because they think they are invulnerable. “In fact, the logical-reasoning abilities of 15-year-olds are comparable to those of adults, (and) adolescents are no worse than adults at perceiving risk or estimating their vulnerability to it,” Steinberg wrote in a paper titled “Risk Taking in Adolescence,” [11] published in Current Directions in Psychological Science in April 2007.

And teens don’t take risks because they don’t have enough information. Efforts to give teens more information about risky behaviors “typically result in improvements in young people’s thinking about these phenomena but seldom change their actual behavior,” Steinberg wrote.

Faulk County Deputy Sheriff Brent Koens sees this in the students he teaches in the Drug Abuse Resistance Education Program, and those teens he encounters otherwise.

“(Underage alcohol use and driving) is a bad idea, and I think the kids all know that,” Koens said. “Everything we teach in an educational setting reinforces that, and many get the message. Still, some don’t, and it’s unfortunate and completely preventable.”

The problem for teens is that making decisions about risky behaviors requires the use of two different systems in the brain: one that uses logic and reasoning, and another system that serves as an inner regulator—controlling impulses, regulating emotions, delaying gratification, and resisting peer influence.

This means that in calm situations, a teenager can be relied upon to make a good decision. But when emotions are involved, teens aren’t reliably using logic to make their decisions.

One especially emotion-inducing situation is when teens are around their peers. In one study of video-game players, teenagers took 50 percent more risks when their friends were watching than they did when they were playing alone, according to Steinberg. Adults in the study performed about the same whether others were watching or not.

“In adolescence, then, not only is more merrier—it is also riskier,” Steinberg wrote.

The fact that the teenage brain is still developing also means that the risks that teens take can be more dangerous to them than they would be to adults.

For example, teens that use drugs and alcohol can get “addicted faster, longer and stronger,” according to Dr. Frances Jensen, who spoke at TEDMED in 2010, as quoted in a CNN.com article [12].

This new research means that letting kids “experiment” with drugs and alcohol as a rite of passage should no longer be socially acceptable, said Sara McGregor-Okroi, executive director of Aliive Roberts County, a coalition dedicated to fostering healthy families.

“That’s what people don’t understand about underage drinking, or marijuana use at an early age, or (prescription) pills, or any of that,” McGregor-Okroi said. “At a young age, the brain is still developing. So when you get that ‘Well, I did it when I was young, and I’m fine’ or ‘Kids will be kids, they just need to get through it’—that’s not true anymore. We know what it does to the brain. We know their brains aren’t prepared for it.”

One startling new statistic is that if you start drinking before age 13 you are five times more likely to have substance abuse issues your entire life [13] than if you wait to start drinking until you are 21, McGregor-Okroi said. Unfortunately, according to the 2009 Youth Risk Behavior Survey, 21 percent of youth respondents in the United States (19 percent in South Dakota, 20 percent in North Dakota) had tried alcohol by the time they were 13.

Even though this new research suggests that just knowing a situation is risky isn’t enough to help adolescents avoid harm, risk education is part of the long-term solution of getting to adulthood healthy and whole.  Eventually, these teens are going to rely on that knowledge to make decisions, even if their emotional circuits are overriding that logic now.

One place where this education happens is in driver’s training. Craig Case, who with Cal Nygaard teaches driver’s education at Webster Area High School, said he uses various methods to impress upon students the seriousness of getting behind the wheel: Law enforcement officers tell the students what they are seeing from younger drivers, and insurance agents come and explain how much it costs parents to insure their kids.

“In the classroom I use the analogy that driving a car is a lot like handling a loaded weapon,” Case explained. “The operator (driver) learns this can be a potentially fatal situation. A lot of bad things can happen if you don’t pay attention.”

Storley, secondary principal from Britton-Hecla, said he takes students to an annual Think, Drive, Stay Alive presentation with a focus on the consequences of drinking and driving that makes a significant impression on students. The speakers are parents who have lost children in an accident, and also kids who have been in an accident.

“It looked like the kids took it very seriously, and when stories are being told you can literally hear a pin drop,” Storley said. “It’s very sobering to hear ordinary people talk about how, after not making the right choices, their lives have changed forever in the blink of an eye.

“It’s also not just their lives,” added Storley. “Those accidents also have far-reaching effects for innocent people involved in the crash that weren’t drinking and driving as well as family, friends and really the whole community.”

But if the new research shows that having good information isn’t enough by itself to keep kids from making decisions that cause harm, what more should parents and other authorities do?

The most important, according to Steinberg, is to keep teenagers—especially younger teenagers (ages 13-15)—out of risky situations altogether. This is a lot easier than trying to get the emotion-control part of a teenage brain to mature faster than it is biologically programmed to develop, Steinberg advises.

These changes could also be pursued on a societal level. Higher prices as well as more required training for sellers can make it more difficult for teens to get alcohol and tobacco. Increasing the driving age is another strategy, and one that is supported by both driving instructors from Webster.

“I believe 14 is a pretty young age for this type of responsibility, especially when you put cell phones into the mix. I wouldn’t mind at all if the age limit went up to 15 years old,” Case said.

Parents should also recognize that the teenage brain is designed to seek thrills and encourage some thrills that don’t have negative long-term consequences, such as playing a sport, dancing or going to an amusement park. This is especially important around the time of prom and even graduation, when students will create their own, potentially dangerous kind of “fun” if there’s not a safer alternative, according to the Aliive Roberts County spring newsletter [14].

The newsletter also reminds parents that it’s not OK to provide teens with alcohol with the reasoning that “they’re going to drink anyway.” “Keep the parent pants on,” the newsletter urges. “Be the wall between teens and alcohol.”

Parents should make an effort be involved in their teenager’s life in a positive way.

This includes lots of driving practice, such as how to drive on gravel or icy roads. Terry Nelson, who teaches driver education in Britton-Hecla, said he’s noticed that students don’t come to his class with as much experience as they used to. “I have a lot of kids that have never driven before they get in the driver’s ed car. Parents have not taken time to take them out on the gravel road and drive,” Nelson said.

It also means establishing ground rules for what is and is not allowed for a teenage driver—rules such as no texting or cell phone use, and no driving with more than one friend in the car can make teenage driving safer.

Jennifer Addis, a woman from Wisconsin who was made a quadriplegic by a drunk driver and gave a presentation to Faulkton High School students in January, advises students and their parents to create a family pledge in which students agree to make good choices, but parents agree to help the children out of danger so a bad choice (drinking underage) doesn’t become a fatal choice (getting behind the wheel after drinking).

“It’s those little choices we make that can develop into dangerous consequences,” Addis said.

More to this story: