Harlan Sundvold and the Oscar Howe painting ‘The Skin Painter’ which is one of a kind, will hopefully be one of the approximately 80 people featured in the three part series. The tickets in Sundvold’s hand started the process of the Sundvolds taking their painting to the road show.

“It was the luck of the draw that started it all,” Harlan and Jean Sundvold said of their recent participation in the upcoming Antiques Roadshow television show.

First, their name was drawn after they applied online to get tickets.

Next, when Harlan and Jean Sundvold received their two tickets in the mail, it started the series of events that led to Harlan being filmed with his Oscar Howe painting (inherited from his brother Glen) for the PBS television show.

Glen Sundvold and artist Oscar Howe were both professors for a time at the University of South Dakota in Vermillion.  Howe taught art and Sundvold taught Spanish. They became friends over the years and in 1973, Sundvold bought the painting from Howe for $900. It as an original and a little different from the abstract style that Howe came to be known for. It shows an Indian woman painting on a buffalo hide with two horses in the background. Harlan’s brother Glen died approximate 28 years ago, and Harlan inherited the Howe painting. Howe stopped painting in 1978 due to Parkinson’s disease affecting his coordination. He died at age 68 in 1983.

Oscar Howe was a full blooded Sioux Indian, born on the Crow Creek reservation in 1915. His artwork became widely known, and a lot of his paintings had an abstract side to them. He won many national awards over the years and has many paintings in art museums such as the Institute of Indian Studies and at his own Oscar Howe Art Center in Mitchell.

“He did a lot of work on the Corn Palace, too, we’ve learned,” J. Sundvold said. “We have a lot of information on Oscar Howe and even have personal letters from Oscar to Glen including the canceled check and original sale bill for ‘The Skin Painter’ painting.

“It was a long, but fun and interesting day,” J. Sundvold continued. “It was all done on one day, July 14, 2012. Everyone was very nice. We went from one line to another as the day went on. They had 75 appraisers working with over 6,000 people, each having two items, so really 12,000 items were appraised that day. Eighty were chosen for the show and we were one of the 80.”

“Bruce Shackelford of San Antonio, Texas, was my tribal arts appraiser,” H. Sundvold said. “We had three appraisers the first time around. Bruce will be the one on TV with me. After we were chosen, I was sent to the Green Room for makeup. We also talked to the producer who asked a lot of questions. The actual taping was done out in the middle of the floor. So when you watch the show, the selection process is ongoing in the background. People from all over come that day; it’s not limited to only South Dakota residents. We tried getting on the show before, when it was in Bismarck, but didn’t get our name drawn. You don’t say what you have when you apply for the tickets; you just apply and hope to have your name drawn. I brought all three paintings (two lithographs) I have by Oscar Howe, but they were mainly interested in the original painting. I was told it was worth about $13,000 but I should have it insured for $15 -$17,000. There were so many interesting things there. It was fun talking to people while being shuffled from one line to another. One lady had to be escorted out as her painting was worth so much. The day went from 7:00 a.m. to 7:00 p.m.”

“We were told they do not guarantee we will be on the show and to keep in mind, it’s subject to change, so we will be watching all three shows. Jean got to watch the taping ‘live’ in another room while I was being interviewed. It will be fun to watch the shows taped in Rapid City.” 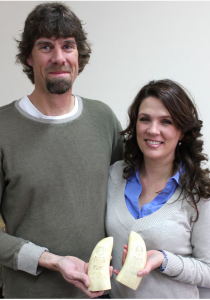 “I’m not certain that my interview will be played on air, but I’m very hopeful it will,” Kathleen Melius said. “It was a really neat experience all around.”

The objects that Melius was interviewed about for Antiques Roadshow are a pair of carved sperm whale teeth. The art form, called scrimshaw, was practiced typically by whalers as a leisure activity, usually portraying scenic pictures or portraits.

These teeth were scrimshawed by a prisoner of war from a British prison on St. Helena Island in the South Atlantic in 1901 (the same island that once housed a very famous prisoner, Napoleon Bonaparte). The teeth portray presidents Paul Kruger and Martinus Steyn, both influential figures in the Boer wars and both scrimshaws portray patriotic slogans in Dutch.

“Clearly there is a lot of history carved into these teeth, and what’s more is who owned them,” said Melius. “These were once the property of Roald Amundsen, the famous Norwegian explorer. How they came into his possession I don’t know, but he traveled to and from St. Helena a few times during his Antarctic exploration.”

“We know that he gave this scrimshaw to Dr. Christin Quevli, who is Jay’s great-uncle on his mom’s side,” said Melius.

Dr. Quevli was a world traveler and justly regarded in his own right for his work on effective treatments of tuberculosis.

“They were apparently very close friends,” said Melius. “So much so that members of Jay’s family referred to Amundsen as Uncle Roald. And over the years, scrimshaw came down to Jay and me. When I heard Antiques Roadshow was coming to Rapid City, I thought it would be a perfect opportunity to bring in the teeth.”

Melius said that she was both surprised and pleased to be invited into the Green Room, so she could have makeup done and be interviewed for the camera.

“I could tell that they were pretty excited about it, and so I felt pretty good about it all,” she said.

Melius was interviewed by Chris Barber of Skinner Auctions, a Malborough, Massachusetts, company specializing in antiques. Melius said that the upcoming episodes of Antiques Roadshow would be very much worth watching.

“They were all very intelligent and knowledgeable people, and there were some very interesting collections and items brought to the show.”

As to what the 112-year-old scrimshaw is worth, Barber estimated that they would be worth about $8-12 thousand at auction, and so the Melius’ have since had the teeth placed in a safe deposit box.

“It’s not a crazy amount of money, but they are certainly valuable, with a lot of history behind them,” she said. “It was a very worthwhile experience overall.”