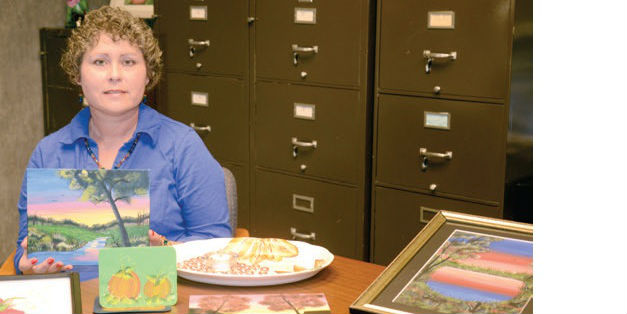 By Webster Reporter and Farmer October 2, 2013

Life comes together for Wanda Skeide when she picks up a paintbrush.

“To God be the glory,” she said. “It’s a given talent. I have no idea why I have this talent. No one else in my family paints.”

Although Skeide’s mother taught her how to sew when she was younger, Skeide never considered herself very artistic.

She began painting for the first time in 2001, shortly after her husband died the year before. Painting became a way to help her through the pain of loss.

“This has been kind of a private thing, very personal,” she said. “It was something I could go home to and it would help me cope.”

Over the years, Skeide has completed more than 20 masterpieces.

Sometimes she is unable to paint any more than once a month.

“I could never sell most of these,” she said.

Some are gifts to family, but most she keeps in her personal collection. Someday she hopes to have an entire wall covered with her artwork in her home.

Today, she takes some of her artwork with her to work at Dacotah Bank in Webster where she displays the paintings for a season before swapping them out with another painting.

“I enjoy having them by me,” she commented. “It’s like a baby with its blanket – it’s a comfort thing.”

Usually the paintings are just on her desk, but people at the bank take note of them anyway.

“I couldn’t have gone through this without them,” she said. “This is a home to come to. We’ve just grown to know each other so much.”

Skeide learned a lot of her brush techniques and color selection through a six-month painting class in Fargo, ND, when she first started painting. The series of classes only happened one time, though.

She says she had to teach herself a lot about lighting effect in painting.

One of her favorite paintings she’s ever done, she says, is a result of meditation on the scriptures – especially on that of the 46th Psalm.

“I’ve never told anyone that before,” she confessed.

The painting is of a bend in a road with fields and forests on either side. Sunlight cascades down through the tree branches, lighting the pathway.

“The rays of sunlight shining through is the Holy Spirit,” she explained.

God has been a constant presence in her life, Skeide says, adding that He’s been there for her even more so in recent years when health and family troubles have seemed like too much to bear.

For the last two years, Skeide has been struggling with pain. It wasn’t until August of this year that they were finally able to diagnose it as psoriatic arthritis and fibromyalgia. Getting on the right medications has helped with the pain, but before then, she said painting helped her through.

“That’s helped me to get through,” she said. “I can just pick up a paintbrush and lose my mind in the painting.”

It’s been good for her as a medical treatment as well because her doctors are encouraging her to keep moving her hands to battle the pain.

“It makes me just want to pick up a brush more and more,” she said. “The more I paint, the easier it is.”

Skeide began working in prison ministry shortly after her son was incarcerated about a year ago. Painting helped her through that emotional time.

“It’s very hard to breathe it all in,” she said. “It’s hard to see someone coming off a meth addiction. But there’s victory in watching that man who was on suicide watch, to see them successfully walk away from that. In that world, they get trapped if they don’t have someone to help them.”

She visits people on the county level and even goes to the state penitentiarysometimes.

“I was always the one who sat in church andthought someone else was being called,” she said.

But today, she says she has experienced no greater blessing than to have someone she’s helped through that rough patch in their lives walk up to her and tell her how they’ve been doing better.

“That has been a true joy for me,” she said. “It helps me deal with my own struggles. It helps me to go home and count my blessings.”

Skeide enjoys acrylics and canvas most in her paintings, although she has done some work on enamel and has a work in progress which is an oil-based type of acrylic. Some paintings can take as little as three or four hours of work – such as each of the four platters she recently painted for her church sale – while others may take her a full day’s worth of work or longer – such as her favorite Psalm 46 painting.

Sometimes, Skeide only gets the chance to paint maybe once a month. Other times, she comes home and paints every evening.

“When you think of what you want to paint, the hardest part is getting the right background color,” she said. “You have to think of how it’s going to work in with what you’re going to bring forward.”

She says that it’s common to get frustrated with a painting.

“You always get mad at some point,” she said. That is the case with a recent painting of hers that isn’t coming together as well as she wants it to. She’s set it aside

for now. “I haven’t given up on it yet. We’ll get there someday.”

But that’s why she likes painting so well. “You can always cover up your booboos with more paint.”

Skeide says she doesn’t know why she has such a talent at painting, but says, “I think we all have talent hidden inside of us.”

When working with prisoners in the prison ministry, Skeide says it helps her to be able to tell them her story.

She tells them, “A big high for me is completing a painting.”