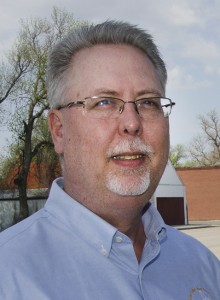 Scott Amundson left Langford when he went to college at Black Hills State, and stayed in the Black Hills for his first working years.

But when he wanted to relax and recharge, he headed east.

“Every time I had a vacation I came to Langford to be with family, fish, and see friends,” Amundson said.

When he found an opportunity to move back, by taking a job as executive director of Glacial Lakes Area Development, he took it. “I decided if I wanted to vacation here, why not live here,” he said.

Amundson is not the only alumnus to take the step to moving back after spending some time back home on vacation.

If people are coming to a rural area when they want to relax, communities have an opportunity, suggested Randy Cantrell, rural sociologist at the Nebraska Rural Futures Institute, speaking at the Symposium on Small Towns at the University of Minnesota–Morris on June 5.

When people living elsewhere start thinking they need a change, they often think of the places where they are relaxed and happy, Cantrell said. If that’s one of our towns, they are already several steps on the way to moving there.

Whether they follow through on that path depends on many factors, but speakers at the symposium suggested there are some things that communities can do to help them along the road back to their hometowns.

The theme of the symposium was “Rewriting the Rural Narrative.” Ben Winchester, a research fellow at the University of Minnesota Extension, said rural places are often portrayed in negative terms—for example, using the term “brain drain” to describe the young people leaving the community after high school.

Winchester said that’s just part of the story, and only the negative part.

And yes, young people do leave, and that contributes to population loss in some rural communities. Lower birth rates and people leaving when they retire are other factors in population loss.

The part that people often don’t hear about is the people who are moving here, Winchester said.

“We actually have significant in-migration of people age 30 to 49 in just about all of our rural communities,” he said.

Small towns tend to lose young people who have little education and life experience, but when the age 30-to-49 people move to rural places, they bring with them significant professional experience and skills—which means there’s actually a “brain gain” happening in many of our small towns.

“This has been going on since 1970,” Winchester said, adding that he travels around the country talking about this trend and people are always surprised to hear it. The “brain drain” gets all the headlines.

He also said that few communities have been actively pursuing these 30-to-49-year-olds, and suggested there may be an opportunity to increase those numbers with a more active recruiting strategy.

The ‘quality of life’ trump card

When communities think about recruiting newcomers, typically the first thing they consider is employment: Where are these newcomers going to work?

Surprisingly, that is not the first thing that potential returnees think about. In fact, it’s not even in the top three.

People who move to rural communities do so because of the slower pace of life, the safety and security of small towns, and the lower cost of housing, Winchester said, citing national surveys. They want to move to rural places first, and they look for jobs second—not the other way around.

Amundson is typical of those respondents.

“I just really embrace small town living,” he said. “I realize living in a bigger city I could probably make more money, but I don’t think the quality of life would be what I’m looking for—things like hunting, fishing, no traffic or pollution, little crime, and being able to know your neighbor.”

Thirty-to-49-year-olds moving to rural areas quite often give up their careers, or at least significant earning potential, to live where they want to live. The quality of life was more important—for them and for their children.

“I was mostly wanting my kids to experience the same small-school education I did and have the same quality experience of living in a small town,” Amundson said. “I think going to a small school, especially with family and friends surrounding you, lends so much to the educational experience and self-confidence when you’re a kid. You are able to participate in so many extracurricular things outside the classroom.”

For returnees, connection to family can be an important motivation. Amundson said he wished he would have been able to spend more time with his mother, who died at a young age. “I didn’t want the same thing with dad,” he said.

But not all of the 30-to-49-year-olds are returnees—not even most of them. About 36 percent in a survey of people moving to Nebraska and Minnesota small towns had lived in those areas previously, according to Cantrell, who conducted the survey. Part of the rest are family members (spouses and children of returnees), but a significant portion did not grow up in the small towns they move to.

Another interesting finding is that these 30-to-49-year-olds are very entrepreneurial—meaning that focusing on creating jobs as a lure to get people to move to rural communities might actually be backwards: Instead, it might work better to lure the people, who will then create their own jobs, and perhaps some more jobs besides.

Both Winchester and Cantrell suggest that small towns think about their assets when they promote their communities to alumni who are back for visits: Things like being able to see the stars at night, outdoor recreation, quiet streets, connection with neighbors, friends and family.

In essence, the things that drew them to visit the community in the first place.

One other strategy for building relationships with alumni is honoring what those alumni have achieved after they’ve left the community. For example, the community of Ellendale, N.D., established the Ellendale Walk of Fame in 2007, in conjunction with its sesquicentennial celebration. “(The Walk of Fame’s) purpose is to recognize the extraordinary accomplishments of a few in order to highlight the contributions of the many local people to the success of current and former Ellendale residents,” according to the Ellendale Walk of Fame display. The display serves as a reminder to both residents and far-flung alumni of the good foundation the community provides to its young people, as well as an inspiration to current residents (both young and not-so-young) of what they can achieve. —Information provided by Ken Schmierer
alumni Ben Winchester brain gain Langford Randy Cantrell returnees Scott Amundson 2014-08-19
Heidi Marttila-Losure
Share !
Previous: USDA gives the go-ahead to 2,4-D-resistant corn and soybeans
Next: Resources for rural communities, August 25, 2014
Scroll To Top