The continued draw on the national propane supply that started in October has hit local pocketbooks in the midst of an extended cold snap.

To explain how end consumer prices reached nearly $5 a gallon at the end of January, you have to look at how propane reaches the Dakotas and consider the demands at a national and regional level.

The short explanation is this: Higher demand from farmers to dry grain during a wet fall harvest on top of increased exports and one less Midwest pipeline in operation. Add in increased demand in southern states that rarely see cold temperatures plus extended cold temperatures in the Dakotas, and you have prices that more than doubled in less than a week. 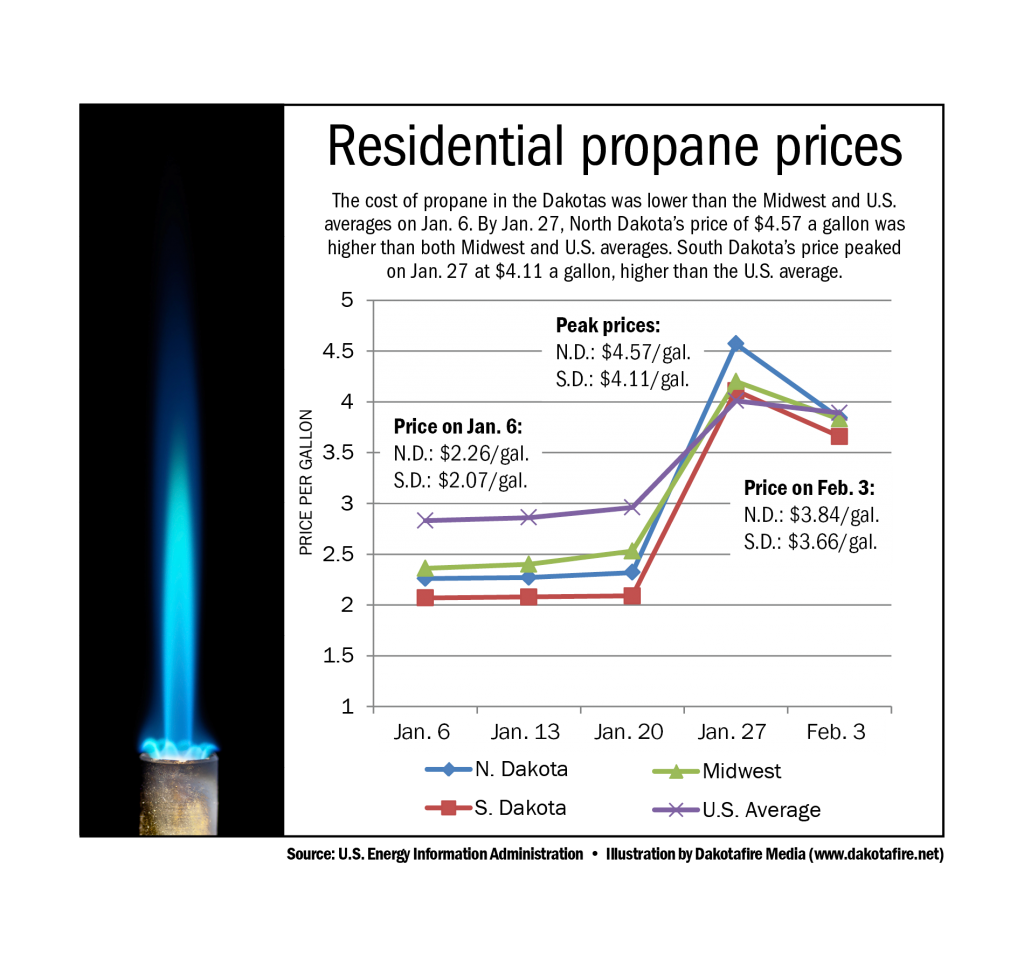 “Two events, the need to dry more crops and the need to run home furnaces these last three months, have made the demand very high. Places south of us, who (usually) only run their furnaces a few days out of the year, have suddenly been using them every day,” said Jim Slunecka of Northern Plains Cooperative of Faulkton, S.D. “Nobody, or at least not very many folks, saw this record winter coming.”

Slunecka watched the price of propane start to spike Jan. 16 then watched it leap upward by $2.52 in seven days.

“That’s just nuts,” he said. “Since, it’s gone down about $1.50, but for a while propane was going for roughly $5 per gallon. It’s not just propane either. Natural gas, fuel oil No. 1—both of those costs increased, too.”

One year ago, residential propane cost about $1.50 per gallon in South Dakota, according to the U.S. Energy Information Administration. By the end of January 2014, the EIA had recorded prices at more than $4 per gallon throughout the Midwest with a $4.57 per gallon high in North Dakota.

Darren Medhaug of Full Circle Ag Co-op in Britton, S.D., said the sudden spike was a nightmare on their end.

“People in the business 40-50 years have never seen anything like it,” said Darren Medhaug of Full Circle Ag Co-op in Britton, S.D. “Usually propane goes up two or three cents or a nickel at most, and when all that happened in a week we really were blindsided.”

Don Clement of Farmers Union Oil in Orient, S.D., points specifically to distribution as a cause for the record prices.

“With this record winter across the country consumption is up, and there is a greater demand for the supply and a greater difficulty in getting it where it needs to go. There is plenty of propane out there, but it’s getting it out here to us that is apparently the problem,” he said. “The cost of the product hasn’t changed. It’s just the cost of transporting it that has jumped up.”

At Northern Plains Cooperative in Faulkton, the company’s propane supply starts in Kansas then is transported by a shared pipeline—which can push diesel, gas or propane—to a local distributor in Wolsey, S.D.

“They can only push one kind of fuel through at a time. So do you need diesel or propane? Well, we need both obviously. And it takes two months for that supply to get from Kansas to Wolsey. You have to predict what your demand is going to be two months out,” Slunecka said. “Nobody guessed that this was coming. Or, if they did, they couldn’t get anything done about it in time.”

In response, local distributors are sending drivers to distribution terminals in northwest Iowa and Kansas. But with the increased demand, drivers experienced long waits.

“The cost of the actual product was actually slightly cheaper, but there were 17 trucks waiting in line to fill up with a wait time of between four to six hours,” Slunecka said.” That driver has to be paid, and he could have made three or four trips back and forth to Wolsey as it takes for one trip to Iowa and back.”

Many states, including South Dakota, issued executive orders to lift limits and extend the number of hours drivers can be on the road to and from distribution centers.

Medhaug in Britton says a crunch on inventory started with the wet harvest. Full Circle expected a 10 percent increased in propane sales going into the harvest season. Instead, they sold nearly nine times the usual.

“We went from selling under 100,000 gallons to about 900,000 gallons, which was not expected by us or by suppliers.  As soon as that was done we went right into winter, and it hasn’t let up yet,” he said. “It was a perfect storm this year and has had kind of a landslide effect.”

He believes the situation will be a one-time deal as national inventory is replenished.

“Inventories were actually up about 500,000 barrels this week, although it is still at a record low of 9.5 million barrels,” Medhaug said. “I think prices might start to level out a little bit, and if we could get some warmer weather it would help a lot to reduce demand.”

In the meantime, local suppliers are encouraging customers to observe conservation and use other heat sources to get through the price spike.

“Honestly I feel sorry for my customers. People who live on fixed incomes, some of them couldn’t afford it at the price before all this started,” said Clement in Orient. “But if they’ve got no other way to heat their home, what choice do they have?”