Want to turn over your position on a board or committee to someone else?

Good luck. Finding people willing to serve in leadership positions in the rural Dakotas may be more difficult than it’s ever been.

We tend to blame this on a declining population, but there’s also another factor at play: At the same time populations are declining, the number of nonprofits is increasing.

At least in part, that’s a good thing, according to Ben Winchester, a research fellow at the Extension Center for Community Vitality at the University of Minnesota.

“Social life is actually flourishing in our small communities. People are actually creating nonprofits. … If our rural communities were truly dying out, we’d probably see a decline in the number of nonprofits across the board, but we don’t,” Winchester said in recent webinar on rural leadership demands, citing an increase in nonprofits in rural areas by as much as 15 percent from 2000 through 2010. In the same timeframe, those counties’ average populations dipped by an average of one percent.

But that’s not much comfort to those trying to maintain the leadership of some of those organizations.  Over the past few decades, those in civic leadership roles have known that, before they can step down, they must first find someone else to step up.

“Now you need to find two people to replace you, because there are that many more nonprofits,” said Winchester.

The population in the Dakotas’ most rural counties dropped by nearly 10 percent from 2000 to 2010, but “‘losing people’ does not mean that you’re losing everyone,” Winchester said. “Most of our rural communities are gaining people aged 30 to 39, but we’re losing our kids, and we’re losing our seniors.” 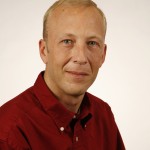 That means that inside the challenge of declining populations there’s also an opportunity—but it will likely require rural communities to make some changes.

“The people who are moving to these small towns are creating new nonprofits, because nonprofits reflect the social interest at any given time,” Winchester said. “Even in our most rural counties in South Dakota, where you lost 7 to 8 percent of your population, the nonprofits still went up (more than 6 percent).”

Between 2000 and 2010, when the total populations of North and South Dakota grew just 4.7 and 7.9 percent, respectively—but dipped in rural areas—the number of registered nonprofits increased from 5,737 to 6,095 (6 percent) in North Dakota and from 6,078 to 7,095 (16 percent) in South Dakota. Each nonprofit must have a minimum of a three-member board of directors, according to Internal Revenue Service guidelines, so that means at least 4,125 new leadership positions were created. 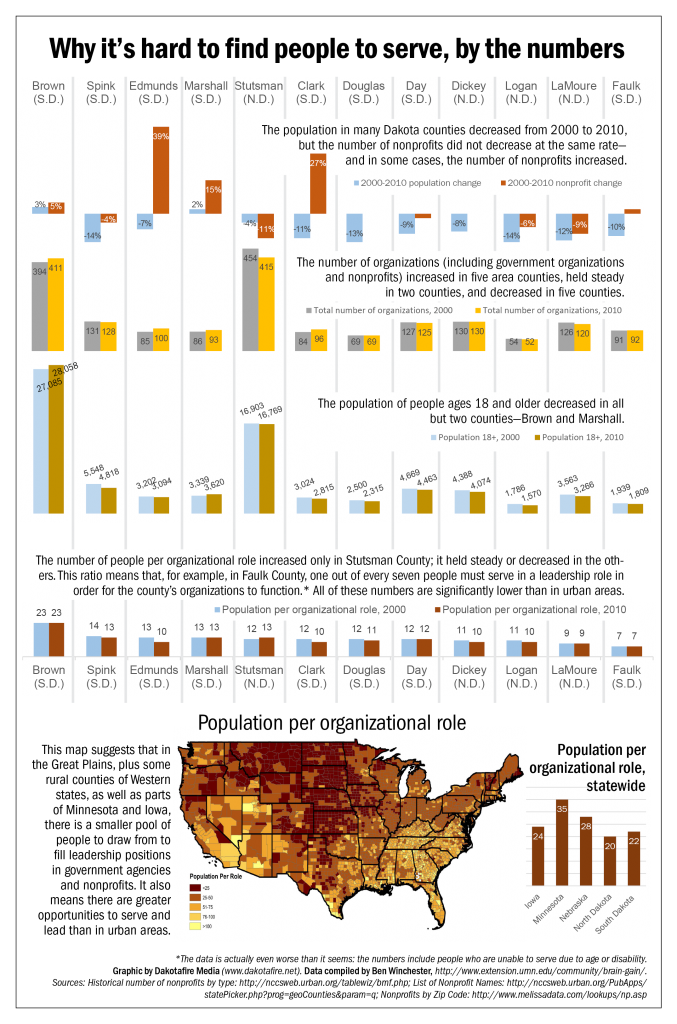 In the rural Dakotas, there is a smaller pool of people to draw from to fill leadership positions in nonprofit organizations and government agencies. Information via Ben Winchester / Graphic by Dakotafire Media

Those numbers, according to Winchester, account for the obvious city, county and township jurisdictions, as well as the less-obvious water and sewer and soil conservation districts. The numbers do not include committees within those organizations.

“The numbers that I provide are very conservative, but it’s a really telling story,” he said.

“There are a lot of informal groups, too, that are not included in this, so there’s a huge asterisk here, but the asterisk isn’t that the data is bad—it’s even bigger.”

According to Winchester’s data, at least one out of every 30 people—more than three percent of the population, and an average of one person per city block—has to not only be involved in some sort of government or nonprofit organization, but has to serve in a leadership role, in order to keep all of the Dakotas’ organizations afloat.

But that’s for the state as a whole.

In Faulk County (S.D.), one out of every seven people—or 14 percent or three people per city block—has to serve in a leadership role. And because that statistic is not adjusted to exclude the youngest and oldest members of a community (those not yet or no longer able to serve), an even higher percentage of “able-bodied” people must volunteer to keep social interests rolling.

Dakotans have always banded together socially

Dakotans have historically been “social beings,” according to Winchester.

“When we first were populating the Great Plains, you had to work together,” he said.

“Rugged individualism might get you here, but community kept you here. … We’ve got this experience of working together, and I think that that—in a lot of ways—is how we’ve been able to weather the storm of the recession so much better.”

According to information gathered by Winchester, communities with higher numbers of nonprofit organizations per capita have lower unemployment rates and lost fewer jobs in the most recent recession.
“I think we have been able to survive much better because we have learned how to work together to solve our problems,” said Winchester.

The way people work together and become involved, however, has changed significantly.

It may be that people struggling to find new recruits to serve in place-based organizations think younger people aren’t getting involved without realizing that many of them are already active—just in different groups.

“I want to take part in the cultural outlets that determine what comes to town and bring things to a small community that may not normally come to a small town,” Meidinger said.
Eberle agreed, saying she wants to “expand her horizons and interests right here at home,” adding that she hopes a children’s weekend art program helps cultivate future artists, as well as community leaders.

Getting people to show up and, perhaps eventually, to serve, “just takes a simple invite to a single event,” said Winchester. “It’s not an open-ended invitation to something that they’re not sure about. Many people do have an empathy for civic involvement, but they don’t feel that they have a connection to some of the social infrastructure.”

Jeanette Robb-Ruenz, who is the president of Opera, Inc. and the Ellendale (N.D.) Historical Society and in the past has served on the boards of directors for the Ellendale Area Arts Council and the Whitestone Hill Organization, agreed.

Many people will volunteer for a specific event, she said, but hesitate to attend meetings and take on larger roles. Sometimes they are new to their professions and are cautious of over-extending themselves. However, younger adults in the community of just under 1,400 typically are willing to help when asked directly—something Robb-Ruenz says happens more frequently in communities that count their residents by the hundreds rather than the thousands.

In Armour, S.D., population 700, there is no shortage of help. The fire department, which has a capacity of 30 members, has a waiting list for membership.

“I am on the church board, the fire department, the economic development committee, the Community Foundation,” Kevin Werkmeister of Armour, S.D., said. “If you want to see your community grow, you’ve got to be part of it—that’s my philosophy.”

More must be done to help create leaders, rather than mere worker bees for an organization, Winchester said.

Werkmeister, who serves on the Armour Community Foundation board of directors, said it’s important that newcomers to a board fill the shoes of their predecessors in a way that equally benefits the board. As a sort of traditionalist approach to board membership, Werkmeister said members of that board do tend to hand-select their replacements prior to exiting, not just to keep the seat filled, but to maintain its standing dynamic.

“It takes the right person to make it work,” he said. “Some people are great at going out and asking people for money, and others just cannot. … You need quite a diverse group, so as (you) go off, (you) try to find the person with same skill set.”

Recently, however, the Armour Community Foundation also has taken a different approach to its board development by selecting a high school representative to its board through an essay and interview process. Already, Werkmeister said, the experience has paid dividends, with the creation of a social media presence for the organization—something veteran members of the board had wanted, but did not feel they had the necessary skills to accomplish.

The design of socially-minded groups in the 21st century is reshaping the very definition of “community.”

“People aren’t afraid of traveling,” Winchester said. “‘Place’ has become less relevant, in terms of how people view their ‘community.’ It’s much more that ‘communities’ are a region—you live in the middle of everywhere, in a sense.

“(Two groups) may have been on opposite sides of the lake, and been rivals, but today, we find that membership is declining, and maybe … once they join forces, they might be able to double or triple their membership. There are some really good opportunities there to move that human capital of how to do community-building and how to do fundraising, how to hold events and bring that talent and expertise to some of the groups that need that expertise.”

Greg Furness, a funeral director and also co-chair of the Chamber of Commerce in Clark, S.D. (population about 1,100), agreed.

“There comes a time when groups need to consoli­date to move forward. There should be some type of unity or common ground that moves things forward,” he said. “There are only so many people to go around in a smaller commu­nity. To be efficient and do justice (to the purpose of the organization, people) can only spread themselves so thin.”

Are organizations in your community having difficulty filling leadership positions? Have you tried some new approaches to find new recruits? We want to hear your story! Go to www.forum.dakotafire.net [3], or send a letter to Dakotafire, PO Box 603, Frederick, SD 57441. Comments received by Dec. 15 may be featured in the Jan/Feb issue of Dakotafire magazine.