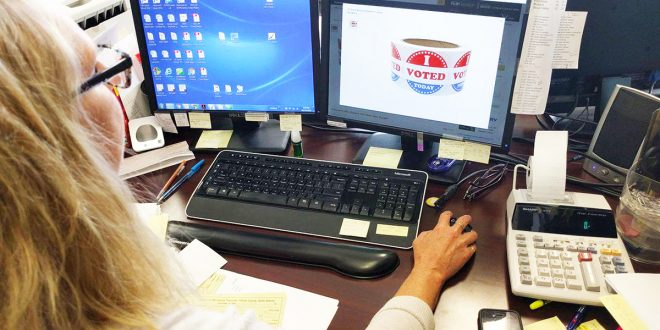 Moody County Deputy Auditor Kathy Lunday shops for “I Voted” stickers to give to voters on Election Day. Photo by Emily Firman Pieper

Stickers can bring more people to the polls

Did you know that running errands on Election Day could help increase voter turnout? It might, if you’re wearing your “I Voted!” sticker. 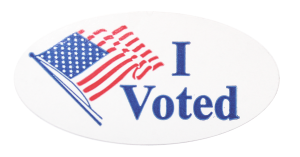 Sporting the sticker after voting is more than just a fun way to show that you exercised your constitutional right to vote—it’s also being recognized as a tool to increase voter turnout.

“People see the sticker and think to themselves, ‘Oh yeah, I forgot to vote. I’ve got to do my civic duty as well,’” said South Dakota Secretary of State Shantel Krebs.

The state does not provide stickers to voting precincts, but Krebs is encouraging county auditors to consider having the stickers available on Election Day. The S.D. Secretary of State’s Office will conduct a training for auditors this fall in preparation for the upcoming general election. One of the action items is for the auditors to “strongly consider” using the “I Voted!” stickers.

Krebs estimates that 40 to 42 out of 66 South Dakota counties already use the stickers.

Whether North Dakotans see the stickers is a local decision. Rachel Bergquist, election administration system manager with the North Dakota Secretary of State’s Office, didn’t have numbers associated with county use.

“This is a county preference where they buy them as a courtesy for the voters,” Bergquist said.

Moody County voters will likely have the option of wearing stickers out of their polling locations this November.

“We hope it will remind people to go out and vote,” said Kristina Krull, the Moody County auditor based in Flandreau, S.D. Krull is exploring different options for purchasing the stickers to have on hand for voters. When a roll of 1,000 stickers comes up on Amazon.com for around 2 cents per sticker, the potential increase in voter turnout seems worth the expense. “It’s just a little encouragement,” Krull said.

Recent studies suggest this might be a courtesy more auditors will want to extend.

“Individuals will embrace behavior that is socially encouraged,” according to a paper published in 2013 by professors from Yale, Loyola and the University of Mississippi. The paper, entitled “Social Judgments and Political Participation: Estimating the Consequences of Social Rewards and Sanctions for Voting,” concludes that if your peers witness you having returned from the voting booth with your slick new “I Voted!” sticker, they will not only hold you in higher esteem, they’ll want to vote as well.

The paper goes into much deeper discussion on social norms and political participation, but for the sake of the sticker discussion, we have our answer: Publicly displaying your “I Voted!” sticker helps increase voter turnout on Election Day.

Auditors, take note of what grade-school teachers and potty-training parents have known for years: If you want to get results, put a sticker on it.