Sitting Bull had just surrendered and was being transferred to Fort Yates when the entourage stopped in Bismarck.

As an eyewitness, J.D. Allen, described: “Sitting Bull was asked to go to the ‘gallery’ of O.S. Goff, the town’s leading photographer, to have his picture taken. But like most Indians of that era, he was superstitious and believed that it was ‘bad medicine’ to have the ‘white man shadow-catcher’ point his little black box at him—it would mean that some part of his spirit would be taken away from him … The more times his picture was taken, the more of his spirit he would lose. So, at first, the Sioux chief refused to enter Goff’s studio. Finally, however, upon the promise of $50 he consented.”

Today, I am the only ambrotypist—practitioner of the collodion (wet plate) process—in my home state. Since I first began making wet plates, I have been fascinated with the images that Goff made in Bismarck and at Fort Abraham Lincoln more than 135 years ago.

I learned that the last great-grandson of Sitting Bull was Ernie LaPointe and that he lived in Lead, S.D. I called him about doing a wet plate shoot to honor not only his great grandfather but to also pay respect to Orlando Goff, the wet plate artist who came before me. Ernie agreed to visit me in studio on Sept. 6.

Ernie taught me much about his people and the history and controversy surrounding his great-grandfather.

He explained that his ancestor’s name had been mistranslated. It was Tatanka Iyotake, meaning “Buffalo Bull Who Sits Down”—different in both species and intention from “Sitting Bull.” Ernie also dislikes the name Sioux, which is what the Lakota people were called by their enemies.

He would rather share humor, which he says is an important part of the Lakota culture.

“Every time you laugh, your memory is stored,” he said, as quoted in a September Mandan News story. “So then it can come back in the time that you need it.”

The photo shoot was rather magical, and we both knew that we were doing something very important from a historical perspective by making wet plates together. We spent the day sharing stories, telling jokes, taking wet plates and even enjoyed a meal together.

I now consider Ernie my friend, and I look forward to the next time our paths cross so that I can hear more of his stories and perhaps take some more images of him in silver on glass.

Learn more about the wet plate process at http://sharoncol.balkowitsch.com/wetplate.htm [1] 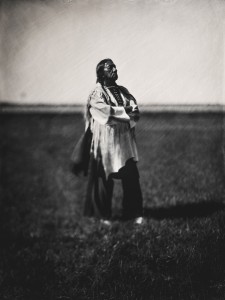 This plate was admitted into the permanent collection of the N.D. State Historical Society in October. LaPointe has started a foundation dedicated to sharing his great-grandfather’s story and legacy; to learn more, go to www.sittingbullfamilyfoundation.org [3]. 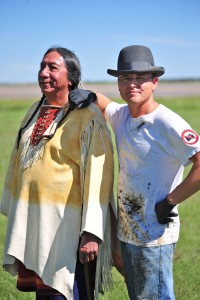 A photo taken during the September shoot.