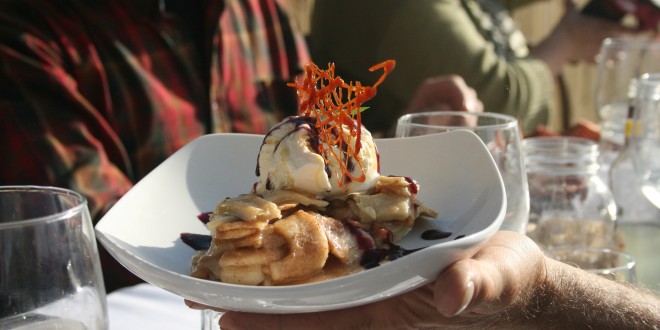 Dessert for a harvest meal prepared at The Field in Adrian, N.D. Photo by Heidi Marttila-Losure

The pleasure of good eating

by Frederick Kirschenmann, Distinguished Fellow of the Leopold Center for Sustainable Agriculture

Editor’s note: This essay is adapted from a keynote address Kirschenmann presented at the 2006 annual Food Alliance Dinner in Portland, Ore., which was later published on the Leopold Center’s website.

For most of us the pleasure of good eating probably consists of chowing down a gusty steak, a delicious pork chop, fresh vegetables with tastebud-exploding flavors, or a savory tree-ripened peach that melts in your mouth.

In truth, the pleasure of good eating consists of much more than tasty treats.

When I was growing up on our farm in North Dakota, almost everything we ate was produced on the farm. We had a garden where we produced all of the vegetables, condiments and most of the fruit that we ate in season or canned for the winter months. Wild plums and choke cherries provided additional fruits from which we made jam and wine. All of our meat came from the farm (beef, pork, lamb, chicken, turkey, goose and duck) and we milked cows for our own milk and cream, and we made our own butter and cheese. Once a year we would buy 400 pounds of flour from which we baked all of our own bread.

There was only one rule at our table: We were expected to never be “schnagich.” Schnagich was a Russian-German word for which there is probably no exact translation. But even if you didn’t understand its exact meaning, the sound of the word was so harsh that you knew it was something you never wanted to be. To be schnagich was to be finicky, but it was much more than that. It was about being disrespectful. At our table we were expected to show appreciation for the food that was provided, for the labor of those who produced and prepared it, for the animals and plants that gave their lives for it, and for the land that was the gift that made it all possible.

Of course, there was a lesson in all this: The pleasure of good eating was about more than the taste of the food. It was about a deep appreciation for — and connection with — everything on our plates.

I suspect that most of us had this appreciation, since we were intimately connected with the food we ate. But much has changed with the industrialization of our food system. For many, food now seems like any other commodity. Somewhere along the way we came to expect our food to be fast, convenient and cheap. “Factory food” is no longer a strange concept.

Factory food has taken us down some peculiar paths. Fruit farmers routinely are told the only thing that matters is color and shelf life. Some food scientists suggest that one day we may manufacture food “pills” containing all of the nutrients we need so that plants and animals will not be needed for food.

One future “food factory” scenario was published in a December 1987 article in BioScience magazine. Martin Rogoff and Stephen Rawlins envisioned a food system driven by technology that would not require farms or farmers at all. Their proposal, in summary, would have us discontinue the inefficient method of producing our food from food crops and animals, and instead produce biomass that could be reduced to a syrup, piped to urban centers where, with transgenic technologies, it could be manufactured into any food the market desired.

While no one has yet tried to operationalize such futuristic scenarios, we have industrialized our food system in ways that are almost as bizarre. We have turned food-citizen-customers into “consumers” expected to be passive recipients of whatever the industry decides to produce, even when much of the food has virtually no nutrient value, let alone any kind of a story that consumers might want to support. As my friend Bill Hefferenan puts it, if the industrial food system were to choose an appropriate motto for itself, it would be “just eat it.”

Rick Schnieders, former president and CEO of the SYSCO Corp., has summed it up nicely. The pleasure of good eating, he says, is not about fast, convenient and cheap, but about memory, romance, and trust. He reminds us that if we want to be successful in today’s food market, we need to have a product so good that when customers eat it they say “Wow! Where did that come from? I want that again” (memory). We also need to provide customers with a genuine story so they can feel good about eating a food, such as who produced it, the type of environmental stewardship practiced in growing, processing and transporting it, how animals were treated, and so on (romance). Customers also want to be active participants in the food chain — to access information and have a relationship that reaches back to the farmer who produced the food (trust).

Is this for real? Yes. Dan Barber, one of the nation’s leading chefs, told me that he spends more time with his servers, acquainting them with the story behind every item on the menu, than he does preparing food. Why? The food story entices his customers to return to his two restaurants.

Does this mean that to enjoy the pleasure of good eating we have to return to the food system I grew up with and become intimately connected to everything we eat? No. But it does mean we need to retrieve those values and make them part of our modern food system.

I would add two more requirements for success in today’s food market: intimacy and affordability.

Simply having information about where the food comes from (important as that is) will not substitute for “being there.” In the long run, our food and agriculture systems need to be more decentralized.

As to affordability, we simply must begin to address the gross inequity deeply entrenched in our global society, especially as it relates to food. Almost half of the world’s citizens live on less than $2 a day, so social unrest is inevitable and peace is unlikely. Capitalism must shift its strategy from wealth concentration to wealth expansion. As long as one-sixth of the world’s population is malnourished, there is little chance that any of us can enjoy the pleasure of good eating.

If we are to sustain the pleasure of good eating, our food systems must consist of a new kind of value chain that connects the farm to the table. Such a value chain would make those connections by:

I suspect this is the modern version of not being schnagich at our food tables worldwide today.