’Kulm Is My Town’ 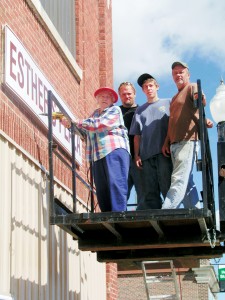 Rural Resident Puts Her Money Where Her Home Is

When Esther Lindgren saw that some of her friends needed to leave town for doctor care, she didn’t just offer a ride. She bought a van.

Eighty-seven-year-old Lindgren of Kulm, N.D., has taken this approach to giving for years: She wants to do as much as she can for the people and town that have blessed her life. Though it might seem natural, in fact Lindgren’s perspective is an uncommon one and goes against the trend of the traditional estate plan. But, in her opinion, it’s simple logic: “I’m giving my money to Kulm. That’s where I made it all, and that’s where I’ll spend it.”

Her only child, Mark Lindgren, lives in Oregon with his wife. Mark grew up in Kulm as well, and returned to farm for a few years early in his life. He understands her love for their hometown and is proud to see her generosity at work.

“She’s always said, ‘I don’t want my money going to Oregon,’” he said with a laugh, “and I completely support her in that.”

Esther was born on a farm outside town and has lived in Kulm her entire life. After finishing high school, she started teaching at Kulm’s country school and continued when it moved to town. She taught for 41 years, shaping the lives of hundreds of children. Since she retired from teaching, she’s found other ways to shape her community, by donating to various projects and then taking on her own.

Ten years ago Esther recognized that many of her friends and neighbors needed more advanced care at hospitals and doctors out of town. She had her own car, but she decided to buy a “community van” of sorts and make it available to anyone or any group of people who just needed a reliable vehicle for a long drive. As of last year, when she sold the van, it had 71,000 miles on it.

Four years ago, she made another big investment in the community. A building on Main Street was unused and in disrepair. The owner at the time wasn’t interested in making the necessary updates. Esther saw the opportunity to leave a legacy to the town that would provide usable space for businesses and beautify Main Street.

As a testament to the value Kulm placed on the building, a group of community volunteers gathered to gut the building and prepare it for renovation. Altogether, Esther spent $125,000 to purchase and renovate the building. Two businesses now rent the storefront space, one of which was a new business in the community.

Currently, Esther has started conversations with the city council in hopes of donating the building to the city. “The city of Kulm is always gonna have it,” she said, “and they might just as well start now. I better give it to the city while I can.”

From grocery shopping to building renovation, Esther has made it a point to financially support Kulm. She thanks God that she has the finances to give, but Kulm is thankful she has the desire. It takes both.

“One day somebody asked me why I gave to something in Kulm,” Esther recalled. “I said, ‘Kulm is where I’ve lived, and Kulm has done everything for me. Kulm is my town.’”