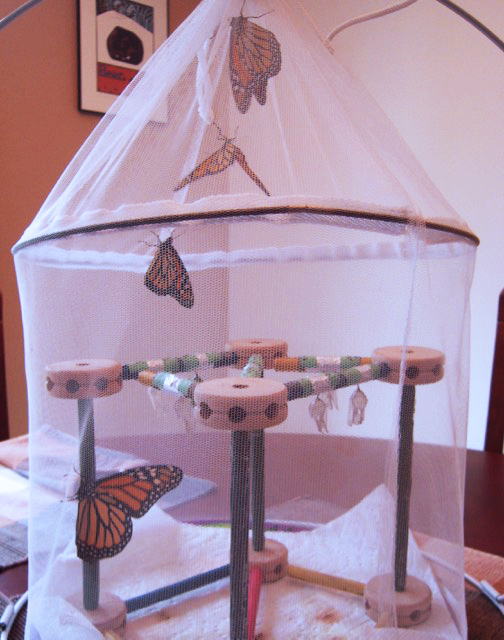 David LaRochelle of White Bear Lake, Minn., hatched out nine monarchs this spring in this enclosure made with netting and tinker toys. Courtesy photo

Not long ago, I opened my back door in St. Paul, expecting a fine summer morning. Instead, the sky was as gray as November, the air so thick with smoke that it hurt my lungs. Toward evening, patches of blue returned to the sky and I went for a walk, but our quiet, leafy neighborhood still smelled like burning tires.

I had known there were wildfires in Saskatchewan, but that was more than 900 miles away. Now, suddenly, here was an environmental problem that wouldn’t stay in the distance. Instead it came home to my neighborhood, my life.

After that, I began giving more thought to what might seem a small thing: the monarch butterfly.

As many people know, monarchs are in trouble. Milkweed is the only food monarch caterpillars can eat. But in recent years, the widespread spraying of herbicides on herbicide-resistant corn and soybeans has virtually eliminated milkweed from farm fields, one of the main places it used to grow. Monarch populations have taken an alarming dive: The monarch is now being considered for the endangered species list.

I tend to look at Facebook to avoid reading depressing environmental news, and recently I’ve noticed how many people in my little cyberworld are starting to raise monarchs by hand. One friend put a charming picture of soon-to-be-released butterflies on his Facebook page. Another friend who has been raising monarchs for years says it “gives her joy.” For her, it’s a way to try to leave the world a little more beautiful for her grandchildren.

Nobody thinks raising butterflies by hand will save the monarch, of course. But it does show the great good will that many people, especially in urban areas, feel toward the gaudy and cheerful-looking creatures they’re accustomed to seeing in their gardens. “It’s gotten right down to where backyard animals are in trouble,” says Deb Wallwork, an independent filmmaker working on a film about monarchs.

Wallwork was spurred to action after reading an article in The New York Times warning that millions of monarchs that once migrated between the Midwest and Mexico may someday be only a memory (http://www.nytimes.com/2013/11/24/sunday-review/the-year-the-monarch-didnt-appear.html [2]). Now, she’s been interviewing people in rural areas about efforts to plant more milkweed and other wildflowers (monarchs also need wildflowers for nectar to feed on during their migration) on so-called “marginal” land—roadsides, hunting land, and conservation reserve programs.

An ambitious federal proposal calls for planting milkweed in a 200-mile swath on either side of Interstate 35, along the monarch’s north/south migration corridor. But to me, there’s something depressing about this kind of industrial-style megaplan. I can’t help imagining monarchs fluttering helplessly in the air currents from whooshing semitrucks. I picture orange-and-black wings splattered on windshields. I also suspect that huge environmental proposals like this may be easier to put on paper than to implement.

Not long ago, I was walking along a gravel road in South Dakota, admiring the patches of milkweed that grew here and there in the ditches. The plants were in full bloom, yet some of the flower heads were nodding as though they had been newly sprayed. And it occurred to me: Why not begin here? There are thousands of miles of quiet country roads in the Midwest.

Are there ways that township boards or county commissioners who oversee those roadsides could cut back on spraying or mowing? Could they manage roadsides in ways that would encourage the growth of more milkweed and other wildflowers? (Wildflowers also benefit bees, which in their role as pollinators are critical to the farm economy.)

Could the immense good will that urban people feel toward monarchs be directed in any way toward working with farmers? You’ve heard of Community Supported Agriculture, or CSA, programs. What about milkweed preserves? What if a group of urban people went together to fund acres of milkweed instead of vegetables?

For several generations, hunters (many of whom live in the city) have supported organizations to preserve habitat for pheasants, ducks and other wildlife. You’ve heard of Ducks Unlimited and Pheasants Forever. What about Monarchs Unlimited? Monarchs Forever?

I’ve recently learned that just this summer, Pheasants Forever announced a plan to give grants to Minnesota youth community organizations to plant wildflowers. “Habitat necessary for rapidly declining populations of honey bees and monarch butterflies is also the very same diverse grassland and prairie flower habitat necessary for pheasants, quail and a host of other wildlife species,” the Pheasants Forever announcement reads. “Likewise, the insects produced in this habitat are the primary food source for pheasant chicks during their first months of life.”

Saving the monarch will be like putting together a large and complicated jigsaw puzzle. There is no big, easy solution, but maybe it wouldn’t be hard to start putting some small pieces in place right now.

Mary Losure is a former environmental reporter who now writes books for children (learn more at marylosure.com [3]). She is also (in case you wondered) related to Heidi Marttila-Losure, who is married to Mary’s son, Dave.

What do you think about a plan to connect urban and rural folks to help the monarchs? Add your voice at forum.dakotafire.net [4].