Many of the problems that South Dakota’s rural communities are facing now—closing schools, difficulty recruiting volunteers for fire departments and ambulance services, shuttered businesses—are likely to get worse in the next 23 years, if population projections from the South Dakota Rural Life and Census Data Center prove accurate. One problem is likely to be particularly noticeable: A significant increase in the number of elderly in communities with fewer able-bodied people to take care of them. 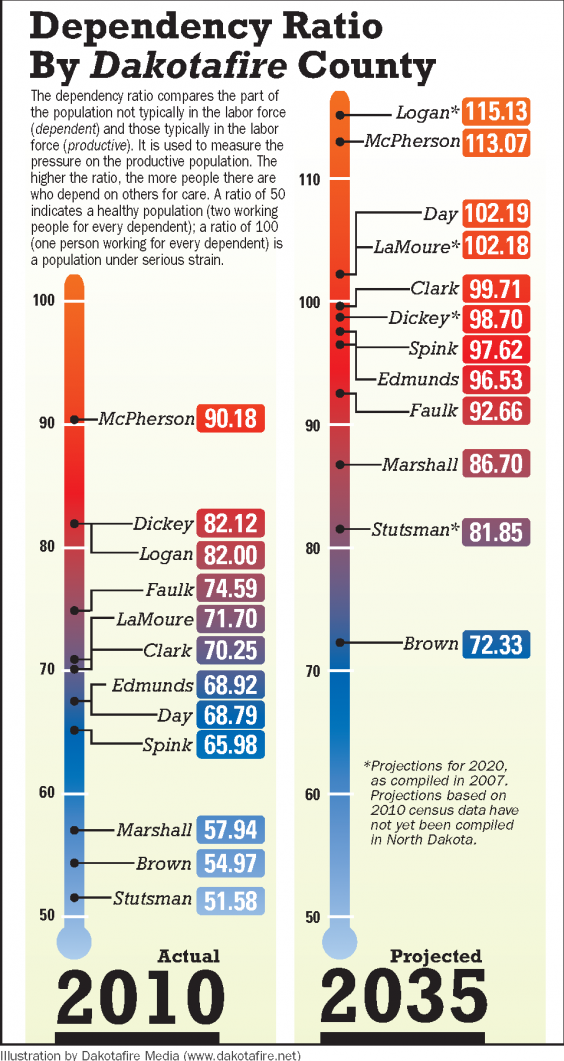 [1]The data center compiled and analyzed the results of the 2010 census and projected them out to 2035, with the assumption that current trends will continue. Those projections show that the average age in South Dakota is rising faster than the national average, a trend that will likely have a serious impact on rural communities. Of the factors that influence average age, the greatest is the migration of young people to larger cities and other states.

“We looked at outmigration and we looked at birth rates, and if we continued the same rate as we’ve got, at the end of it, we wound up with the entire middle of the population disappearing,” said State Demographer Mike McCurry.

Right now, the Dakotafire region has counties with dependency ratios as low as 55, meaning nearly two working people to support every dependent person. This is a fairly healthy dependency ratio. Faulk County’s is 74, which is probably noticeable to its residents; McPherson County’s dependency ratio of 90 is almost certainly putting strain on the county’s resources.

By 2035, the ratios will rise dramatically in all of Dakotafire’s counties—some with projected ratios of more than 100, which marks the point when there are more people depending on others for everyday needs than people working to provide for them. With more elderly or very young people dependent on others for the essentials and fewer people in the middle age groups to provide for those needs, a community can stagnate, struggling to both provide care for those who need it and maintain jobs and essential services for the working population.

(See graphics depicting the change in Dakotafire counties below.)

South Dakota already has the one of the oldest workforces in the nation, with a greater percentage of workers being 65 or older than in any other state. With fewer young people staying in-state or returning after going to college or serving in the military, the jobs held by older workers may simply disappear as they retire without anyone to take their place. McCurry said that emergency services like volunteer fire departments are particularly vulnerable, especially in small communities where many jobs are filled by people who live outside of town and many townsfolk commute to larger cities for work.

In communities where the local school has been closed to consolidate with another town’s in addition to jobs moving to other larger cities, young people can become especially discouraged from returning.  For a community already struggling with a high dependency ratio, the further loss of young people would worsen it, making reversing the trend more difficult.  If a community wants to lower a high ratio, “keeping young people in the area is the main way for that to happen,” McCurry said.

Getting young people to return home can be a challenge, but there are lots of innovative ways that communities can explore to entice them to return [2]. Many times, migrating young adults haven’t moved far from home. Most outmigration in rural South Dakota happens in what McCurry calls a “kind of two-step process,” where, after college or military service, young adults will return to their home state, but settle in larger cities near their hometowns.  It’s not until the next generation that people leave the state completely. This means that if young adults return to their hometowns to start their families instead of moving to nearby cities, it can make a huge difference, keeping enrollment up in local schools and providing more support for local businesses.  And now, moving back to a small town for a career is becoming more and more viable thanks to the increasing popularity of the online office, allowing people to work online from home.

While the data from the census and population projections [3] seems to paint a bleak picture for the future many rural counties, the outlook for South Dakota is not inevitable: Dakotans are already making an effort to reverse these trends and bring young people into the state, both through local efforts and statewide initiatives like the Dakota Roots program. The high quality and low cost of living, combined with a stable job market, already attracts attention in the current tough economic times.

The data does make clear, however, that the continuation of the status quo is going to lead to a difficult future for those communities that don’t try to shift course.

Ryan Clay is a freelance writer living in Aberdeen, S.D.

Hover over the graphics below to see which county it is, then click on the graphic to see the larger version. 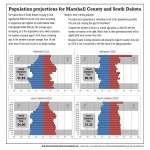 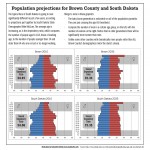 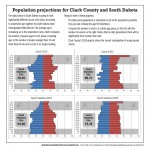 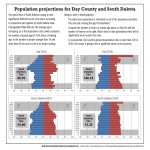 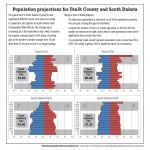 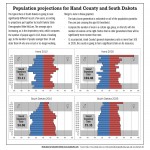 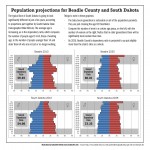 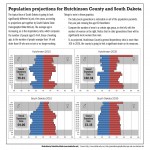 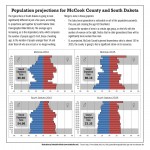 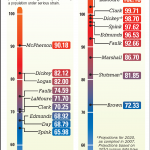 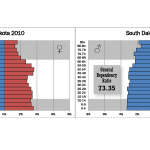